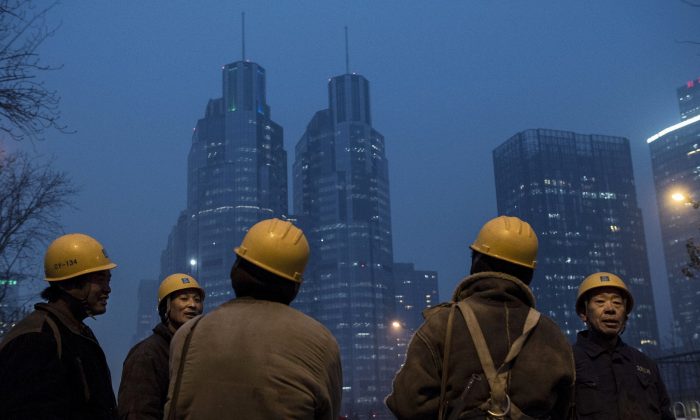 Chinese migrant workers at a construction site in Beijing, on Dec. 9, 2014. The constant inflow of workers from the countryside might have already turned around, according to several estimates. (Kevin Frayer/Getty Images)
Business

Who Is Lewis and What Does His Turning Point Have to Do With China?

For developing countries, meeting Sir William Arthur Lewis is bad news. Although the Noble Laureate has already passed away in 1991, his famous turning point means an end to rapid productivity growth.

Lewis published research in 1954 which states that developing countries will see much slower productivity growth after their urbanization phase is complete. This means the cities have absorbed all workers from the countryside they can absorb or that workers cannot or do not want to move out of the countryside anymore.

According to several estimates, this point has now been reached for China. Goldman Sachs’ Ha Jiming told the Financial Times the growth rate of migrant workers has declined from 4 percent in 2010 to 1.3 percent in 2014. He expects it to contract this year, along with China’s working age population.

Normally this would present a problem because output and productivity growth will invariably decline. If fewer people work, output is less by definition. Labor is more productive in urban areas than in rural areas, so if the trend stops, so will increases in productivity.

Ironically, for China, this might be less of a problem than people think. John Lee of the Hudson institute pointed out quite perceptively that China never relied on labor productivity to generate growth. He cites World Bank figures which put Chinese GDP growth at 162 percent over 10 years. Of these 162 percent, labor only contributed 6 percent, whereas increases in productivity only contributed 20 percent.

The rest was just building bridges, airports and residential real estate, which show up as growth, but don’t really move the country forward. Because labor never played a big role in growth, as of now China doesn’t stand much to lose if the migration trend stops.

However, China wants to move away from investment led growth and “rebalance” more towards consumption. This means wages must go up—consistent with Lewis’ theory—and henceforth, without further gains in productivity, profit margins must go down.

For the inefficient state owned enterprises this doesn’t bode well, as they have largely survived on cheap labor as well as subsidized capital. If China really wants to “rebalance” it has to follow the natural course of development and transform itself into an innovation economy, which fosters productivity growth— a turning point we haven’t seen yet.