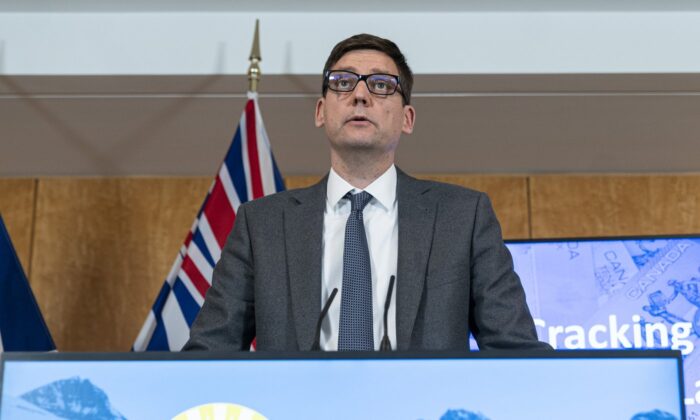 British Columbia Attorney General David Eby is currently the only contender who has confirmed his intention to run as a candidate to become the next B.C. NDP leader and premier, after the incumbent John Horgan recently announced he will be stepping down due to health reasons.

B.C. NDP President Aaron Sumexheltza announced in a statement last week that the party’s leadership campaign will run from July 17 to Dec. 3, 2022, at which time the party will announce the new premier. NDP members can begin voting as of Nov. 13.

Eby announced his bid for leadership on July 19. If elected, Eby says he will focus on bringing more affordable housing and childcare to the province, as well as increasing family-doctor availability.

NDP Jobs Minister Ravi Kahlon who was considering a leadership bid, dropped out of the race in early July to support Eby. Kahlon said he believes Eby  “is the right person to be our next Premier

High-profile Finance Minister Selina Robinson said in a Tweet that she had “considered seriously” running for party leadership, but dropped out to “focus on [her] roles as MLA and finance minister.”

Another name that has come up for the job is Brad West, the mayor of Port Coquitlam. According to Tri-City News, West has not yet confirmed any plans to run for mayoral re-election in the fall.

The 37-year-old father of two became Metro Vancouver’s youngest mayor upon election in 2018. He has since earned a reputation for speaking out against the Chinese Communist Party’s aggressions and human rights violations and the adverse impacts of CCP-linked money laundering in B.C.

When asked whether he would consider candidacy for NDP leadership, West told The Epoch Times he is “very humbled by all the supportive messages I’ve received from people in Port Coquitlam and all over the province.”

“I will share my plans for my political future in the coming weeks,” he said.

B.C.’s Education Minister Jennifer Whiteside was cited as another possible leadership candidate, but she also threw her support behind Eby. The New Westminster MLA said Eby “will lead our party and our government with strength & empathy,” in a Tweet.

The party appointed Elizabeth Cull, a former cabinet minister, as chief electoral officer to supervise the race. Those wishing to run must submit their applications to Cull for review and pay the entrance fee of $40,000 by Oct. 19, as specified in the party’s race regulations document. Candidates must completely fund raise their entrance fees and also must be NDP members “in good standing” for at least 90 days before the election date.

Horgan has been B.C.’s premier for the past five years and has served in the province’s legislative assembly for the last 17. He has been elected to two straight terms as the province’s leader, but said his health concerns were too great to run for a third straight term in 2024. Horgan will continue leading the provincial NDP until its leadership race concludes.