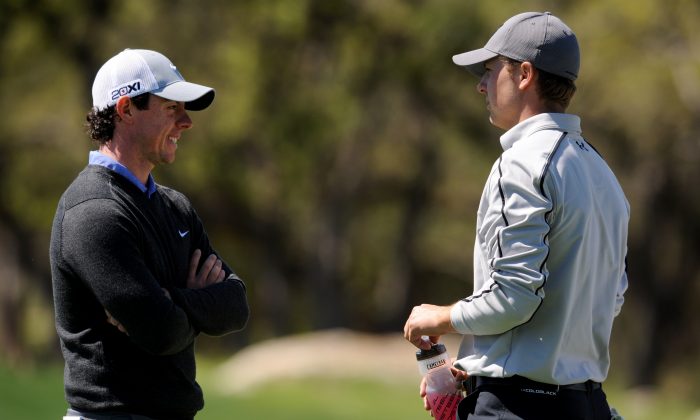 Rory McIlroy of Northern Ireland talks with Jordan Spieth on the 6th hole during the first round of the Valero Texas Open at the AT&T Oaks Course at TPC San Antonio on April 04, 2013 in San Antonio, Texas. (Photo by Steve Dykes/Getty Images)
Golf

Who Is Golf’s Number One: McIlroy or Spieth?

McIlroy has been out of action since tie for 9th place at the US Open this past June at Chambers Bay. Mcllroy was on the sidelines after badly injuring his ankle during a soccer game match with friends.

The #1 and #2 players have not really encountered one another directly but until Johnson snared the Claret Jug at The Old Course at St. Andrews—it was there two golfers who had won the last four consecutive majors played.

At 2:20 PM today the two heavyweights will be vying for the ultimate prize this week—the famed Wannamaker Trophy—emblematic of PGA Championship success. Lurking just around the corner is an even bigger prize—sitting atop the world’s rankings as the game’s premier player. McIlroy has held the position firmly since his stellar play starting around this time last year when he won in consecutive order The Open, The Bridgestone Invitational and then the PGA Championship—his second win at the event in near total darkness last year at Valhalla just outside of Louisville.

Spieth has been the main story line for the ’15 season. The recently turned 22-year-old (July 27) has been nothing short of sensational this year. Spieth led throughout The Masters this past April and showed a steep learning curve after fumbling away the same event a year earlier. His win at the U.S. Open demonstrated serious poise after double-bogeying the 71st of the event. Spieth came back to birdie the final hole and watched as Dustin Johnson inexplicably three-putted the final hole from 12 feet and thereby losing the event by a shot.

Golf has not had a real rivalry for quite some time. When certain players have played well usually it has meant other known players have failed to play well that same week. Such is the case with the likes of Tiger Woods and Phil Mickelson. Both players have won on golf’s grandest stages but often their peak performances did not include a win aganst their most noted rival in clear head-to-head competition.

This week’s PGA at Whistling Straits affords the opportunity for McIlroy to state in clear terms—Spieth included—that the current world number one is intent on staying atop the golf mountain. Spieth, on the other hand, being younger and driven to win, clearly has a different storyline he wishes to attain.

The most noted competition between the world number one and two players has to go back when Jack Nicklaus and Tom Watson battled each other magnificently at both the ’77 Masters and more significantly during their epic, “Duel in the Sun,” at Turnberry that same year when Watson, paired with Nicklaus for all four rounds, finally emerged with a one stroke win, shooting matching 65’s in the final 36 holes to gain not only the Claret Jug but also reinfoce his position as the game’s best player.

McIlroy and Spieth have no such history but given their young ages the possibilities are certainly present for the two to create such future storylines.

McIlroy has not been pushed by any competitors—save for Spieth. And Spieth has not had to look squarely at the man who stands in his way to the top of the golf mountaintop.

That will change today as both will exchanges golf shots for the first 36-holes. Clearly, there are a host of other equally talented players in the field who may emerge but right now the bright spotlight is on these two young men. McIlroy won four majors by the age of 25—only matched by the likes of Nicklaus and Tiger Woods. Spieth has shown a maturity far beyond what any player has ever shown—save for the likes of McIlroy and the aforementioned Nicklaus and Woods.

Something has to give when two aspiring talented players match against one another. The tee time is set. The play between the two will be most revealing. The 97th PGA Championship is clearly signalling a new generation of stars is set to demonstrate what they have to offer. Play away please indeed.