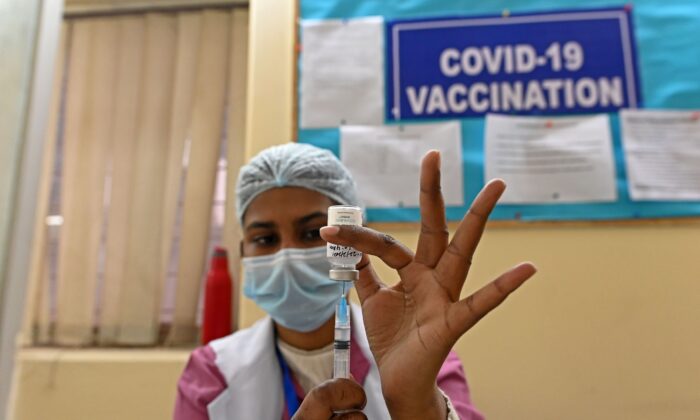 A medical worker prepares to administer a dose of the COVID-19 vaccine at a vaccination center in New Delhi, India, on Feb. 22, 2021. (Sajjad Hussain/AFP via Getty Images)
WORLD

The World Health Organization (WHO) on Friday has granted emergency approval for the India-made coronavirus vaccine NVX-CoV2373, also known as Covovax, to vaccinate more people in lower-income countries.

“This listing aims to increase access particularly in lower-income countries, 41 of which have still not been able to vaccinate 10 percent of their populations, while 98 countries have not reached 40 percent,” Dr. Mariangela Simao, assistant-director general at WHO, said in a statement.

Covovax, manufactured by Serum Institute of India (SII) under license from American company Novavax, requires two doses and is stable at 2 and 8 degrees Celsius refrigerated temperatures.

The newly WHO-listed vaccine uses a novel platform and is produced by creating an engineered baculovirus containing a gene for a modified SARS-CoV-2 spike protein.

Adar Poonawalla, chief executive officer of the Serum Institute of India, said in a statement that Covovax is “the first protein-based COVID-19 vaccine option” to be made through the COVAX facility, which allocates and distributes vaccines equitably to participating countries and economies.

“Our partnership with Novavax has been successful in providing global public health leadership and ensuring that all countries have broad access to a viable vaccine,” Poonawalla said, adding that Covovax demonstrated high efficacy and tolerability profile.

According to WHO, Covovax was assessed based on quality, safety, and efficacy, a risk management plan, programmatic suitability, and manufacturing site inspections carried out by the Drugs Controller General of India, before being issued an emergency use listing.

“The Technical Advisory Group for Emergency Use Listing, convened by WHO and made up of experts from around the world, has determined that the vaccine meets WHO standards for protection against COVID-19, that the benefit of the vaccine far outweighs any risks, and that the vaccine can be used globally,” it stated.

In a joint statement, SII and Novavax said the vaccine has been allowed for emergency use in Indonesia and Philippines, and is currently under review by multiple regulatory agencies worldwide.

“[Novavax] expects to submit its complete chemistry, manufacturing, and controls data package to the U.S. FDA [Food and Drug Administration] by the end of the year,” they stated.

The companies also noted that an additional emergency use filing is under review by WHO for a vaccine to be marketed by Novavax under the brand name Nuvaxovid.

“The originator product produced by Novavax, named Nuvaxovid, is currently under assessment by the European Medicines Agency (EMA). WHO will complete its own assessment of this vaccine once the EMA has issued its recommendation,” WHO stated.