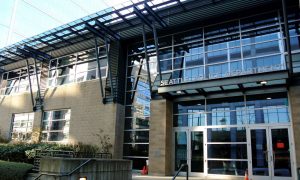 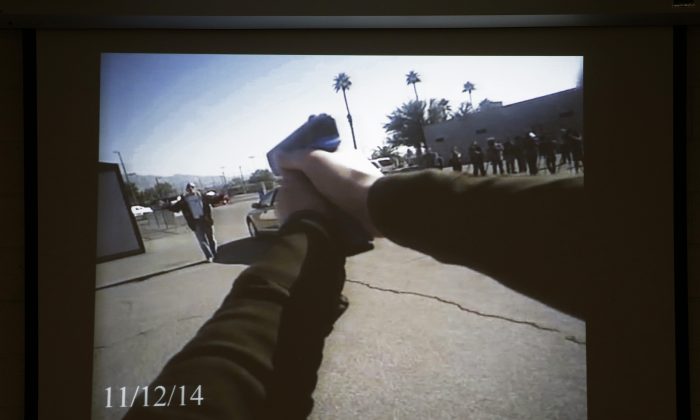 Footage from a Las Vegas police department body camera demonstration is projected on a screen in this Nov. 12, 2014 file photo. (AP Photo/John Locher)
Crime and Incidents

The Seattle Police Department might have to put its plans on hold for outfitting everyone on its 1500-strong police force with body-worn cameras. Privacy concerns and widely varying interpretations over a range of details—from how data is recorded to how it is stored and accessed through public records requests—is being debated.

Seattle is currently one of a number of larger U.S. cities that includes New York City, with a pilot program underway for cameras.

An early collaborator on the pilot program, the Community Policing Commission (CPC), has now called for review of the pilot program during the 2016 state legislative session. Though it would delay the police’s planned full implementation of the program, the CPC warns that two bills introduced during the current legislative session could undo the benefits of body-worn cameras before they even get off the ground.

“They are both pretty extreme,” Fe Lopez, executive director of the CPC said on Tuesday. One bill is backed by the ACLU and the other by the Washington Association of Sheriffs and Police Chiefs (WASPC).

The language of the ACLU bill seeks to protect privacy to such an extent that it would make it extremely difficult to obtain footage once its been put into storage.

The WASPC bill goes even further, noting that “no video and/or sound recording of any kind made by uniformed law enforcement or corrections officers while in the course of their official duties may be made available to the public.” Footage can be requested by involved parties.

For Lopez and the CPC, it’s not necessary to rush to codify a system for controlling footage from body-worn cameras.

“This stuff is turning out pretty fast without a clear sense of what is needed and wanted,” said Lopez. She said even the commissioners of the CPC can’t come to a group consensus. Aside from public access to video footage, they are worried about everything from the safety of innocent bystanders who might witness a crime and later be targeted, to privacy of people filmed in their homes, to public access to information.

Their solution: slow the process down.

“Why don’t we just take a step back, do some real engagement in the community and think about what is really the purpose of body cameras?”

In a statement published on their website in December, the ACLU of Washington State said that body cameras need “careful consideration.”

“Before we rush to embrace body cameras as an answer to police accountability concerns, let’s carefully consider whether the value of body cams to the public is being oversold—and whether they bring a host of new problems that have no easy solutions,” said the blog.

The Seattle Police Department could not be reached for comment.