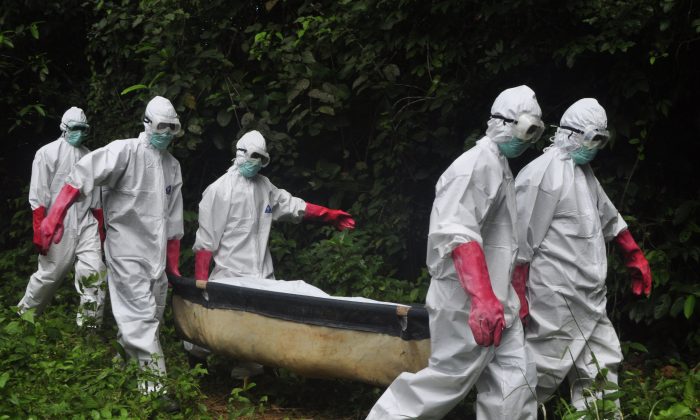 FILE - In this Saturday, Oct. 18, 2014 file photo, a burial team in protective gear carry the body of woman suspected to have died from the Ebola virus in Monrovia, Liberia. (AP Photo/Abbas Dulleh, File)
Africa

WHO: Ebola Vaccine Trials In W. Africa in January

GENEVA—With Ebola raging in West Africa, the World Health Organization is pressing the search for a vaccine and hopes to test two experimental versions as early as January on 20,000 front-line health care workers and others in the hot zone — a bigger rollout than envisioned just a few months ago.

An effective vaccine would not in itself be enough to stop the outbreak — for one thing, there probably won’t be enough to go around — but it could give important protection to the medical workers who are central to the effort. More than 200 of them have died of the disease.

The WHO, which has come under fire for bungling its initial reaction to the Ebola crisis, is helping coordinate trials of two of the most promising experimental vaccines.

The “real-world” testing in West Africa will go forward only if the vaccines prove safe — and also trigger an adequate immune-system response in volunteers — during clinical trials that are either underway or planned in Europe, Africa and the U.S., the WHO said. The preliminary safety data is expected to become available by December.

Dr. Marie Paule Kieny, an assistant director general for the U.N. health agency, acknowledged there are many “ifs” remaining — and “still a possibility that it will fail.” But she sketched out a much broader experiment than was imagined only six months ago, saying WHO hopes to dispense tens of thousands of doses in the first couple of months of the new year.

“These are quite large trials,” she said Tuesday.

WHO spokeswoman Fadela Chaib later said the agency expects 20,000 vaccinations in January and similar numbers in the months after that.

The outbreak in West Africa has killed over 4,500 people, mostly in Liberia, Guinea and Sierra Leone, since it emerged 10 months ago. Experts said the world could see 10,000 new cases a week in two months if authorities don’t take stronger steps.

The vaccine push comes as Sierra Leone said Tuesday that the number of infected people in the country’s western region is soaring, with more than 20 deaths a day. That region is on the opposite side of the country from where the first cases emerged.

One of the vaccines that Kieny mentioned, Okairos AG, is being developed by the U.S. National Institutes of Health and GlaxoSmithKline from a modified chimpanzee cold virus and an Ebola protein. It is in clinical trials now in Britain and in Mali.

GlaxoSmithKline said the vaccine is being manufactured at a plant in Rome.

“We have other vaccine facilities around the world, and we are seeing what we can do to ramp up production to commercial scale,” said Mary Anne Rhyne, Glaxo’s U.S. director of external communications.

The second front-runner, developed by the Public Health Agency of Canada and known as VSV-EBOV, has been sent to the U.S. Walter Reed Army Institute of Research in Maryland for testing on healthy volunteers. It will also be tested shortly among volunteers in Switzerland, Germany, Gabon and Kenya, Kieny said.

Doctors Without Borders, whose medics have been at the forefront in treating Ebola patients in West Africa, urged pharmaceutical companies to speed up their work.

“Vaccination of front-line health workers — who are among the most vulnerable people — and mass campaigns to vaccinate large numbers of people in affected and at-risk countries could make a huge difference in curbing this outbreak,” the group’s medical director, Bertrand Draguez, said in an interview on its website.

Also Tuesday, WHO’s Chaib promised a thorough public audit of the agency’s early missteps in responding to the Ebola crisis. But at the moment, “our focus is on the response.”

From The Associated Press. AP reporters Maria Cheng and Angela Charlton in London, Lauran Neergaard and Matthew Perrone in Washington contributed to this report.