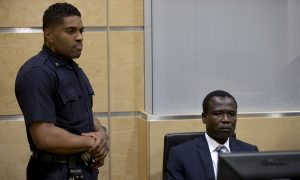 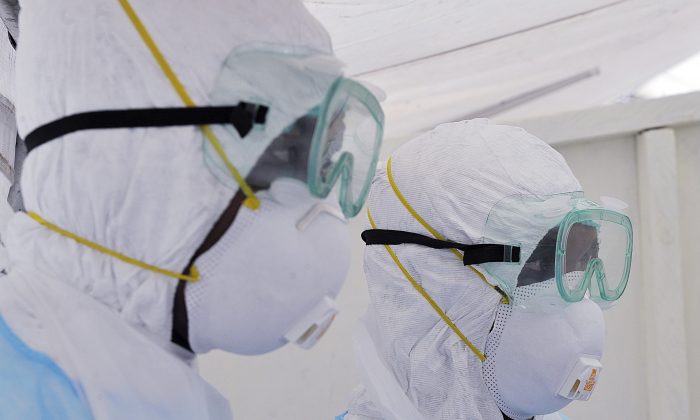 Kenyan medical workers from the Infection Prevention and Control unit wearing full protective equipment are pictured as they show on Oct. 28, 2014, how to handle an infected Ebola patient on a portable negative pressure bed at the Kenyatta national hospital in Nairobi. (Simon Maina/AFP/Getty Images)
Africa

WHO: Ebola Decline in Liberia Could Be Real Trend

DAKAR, Senegal—The rate of new Ebola infections in Liberia appears to be declining and could represent a genuine trend, the World Health Organization said Wednesday, but the epidemic is far from over.

The disease is still raging in parts of Sierra Leone and there is still a risk that the decline in Liberiawon’t be sustained, Dr. Bruce Aylward, an assistant director-general for WHO, warned reporters.

Several times in outbreak officials have thought the disease’s spread was slowing, only to surge again later. Officials have often blamed those false lulls on cases hidden because people were too afraid to seek treatment, wanted to bury their relatives themselves or simply weren’t in contact with authorities.

But now there are some positive signs: There are empty beds in treatment centers in Liberia and the number of burials has declined. There may be as much as a 25 percent week-on-week reduction in cases in Liberia, Aylward said.

Throughout the Ebola outbreak, WHO has warned that its figures have been incomplete and the number of cases are likely vastly underreported. That is still a concern, Aylward said, but the trendnonetheless appears to be real.

“The epidemic (in Liberia) may be slowing down,” he said during a telephone press conference from Geneva. The slowdown could be attributable to a rapid increase in safe burials of Ebola victims, an uptick in the number of sick people being isolated and major public awareness campaigns on how to stop transmission.

So far, more than 13,700 people have been sickened in the outbreak, which has hit Liberia, Guinea and Sierra Leone hardest. More than 6,300 of those are in Liberia alone.

Aylward cautioned against reading too much into the decline, saying that any let-up in the response could allow the disease to surge again.

“Am I hopeful? I’m terrified the information will be misinterpreted and people would start to think, oh great, this is under control,” he said. “That’s like saying your pet tiger is under control.”

Liberia’s Red Cross said Tuesday that teams collected 117 bodies last week from the county that includes Monrovia, down from the high of 315 in one week in September, and the government reported last week that only about half of the available beds in treatment centers were occupied.

Others were more reluctant to call the decline a trend.

Ebola outbreaks come in waves, warned Benoit Carpentier, a spokesman for the International Federation of the Red Cross. Red Cross figures show deaths are still increasing outside Monrovia, he noted.

It’s possible that at least some of the decline is because cases are being hidden — a phenomenon that has plagued the response to the outbreak since the beginning, said Ella Watson-Stryker, a health promotion manager for Doctors Without Borders in Liberia.

She said her team has heard of people doing their own burials in order to avoid a government order that Ebola victims in Monrovia be cremated; the government has also cited fear of cremation, a practice deeply at odds with Liberian tradition, as a reason beds are empty in treatment centers. Watson-Stryker added that people may be staying away from such centers because they are still confused about what kind of care is given at them.

However the decline is characterized, Aylward said the response must not relax.

“This hasn’t dropped off a cliff. … There’s a huge risk it wouldn’t be sustained,” said Aylward. “It would be a huge mistake … to think we can scale down the response.”

Instead, experts should redouble their efforts to track all of the people with whom the sick have come into contact — a task that has been nearly impossible in many parts of the outbreak because of the sheer number of infections.

There’s also tremendous work still to be done outside Liberia.

The western areas of Sierra Leone, near the capital, have seen a particularly steady increase in cases lately.

“We are in a crisis situation, which is going to get worse,” said Palo Conteh, the newly appointed head of Sierra Leone’s national Ebola Response Center. “Ebola is right ahead of us and it is running fast.”

He urged areas of the country experiencing increases in cases to follow the example of areas where the disease’s spread is declining: avoid contact with the sick, bury the dead properly and seek quick treatment for fevers.

The top U.N. official on Ebola, Anthony Banbury said Wednesday that the tremendous international response was beginning to pay off.

But Samantha Power, the American ambassador to the U.N., called on countries — especially those that had promised aid but not yet delivered — to do more.

“The U.S. is not running away from Ebola but walking toward the burning building,” she said, as she urged others to do the same. Power spoke alongside Banbury in Ghana, where the U.N. mission on Ebola has its headquarters.

From The Associated Press. AP writers Francis Kokutse in Accra, Ghana, and Clarence Roy-Macaulay in Freetown, Sierra Leone, contributed to this report.