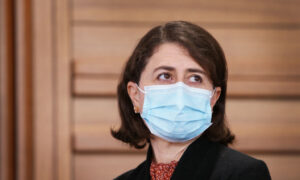 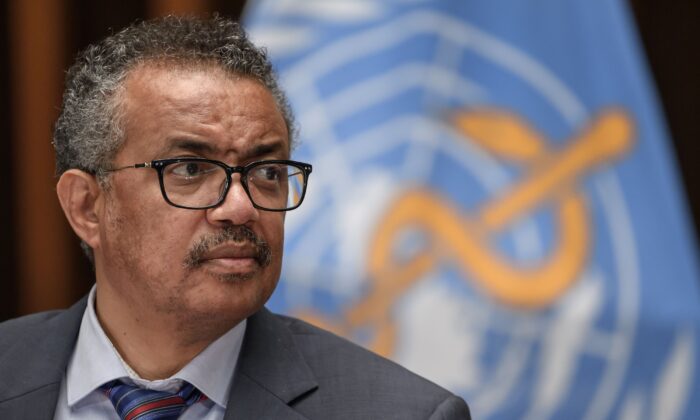 World Health Organization (WHO) Director-General Tedros Adhanom Ghebreyesus attends a press conference organised by the Geneva Association of United Nations Correspondents (ACANU) amid the COVID-19 outbreak, caused by the novel coronavirus, at the WHO headquarters in Geneva, on July 3, 2020. (Fabrice Coffrini/AFP via Getty Images)
WORLD

WHO Demands US, Other Nations to Stop COVID-19 Boosters for Rest of 2021

The leader of the World Health Organization (WHO) is calling on wealthy nations to issue a moratorium on COVID-19 boosters and instead provide initial vaccine doses to poorer nations.

WHO Director-General Tedros Adhanom Ghebreyesus, who has frequently said that wealthier countries should hold off on booster shots, said Wednesday that these nations need to wait until the end of the year.

“I will not stay silent when companies and countries that control the global supply of vaccines think the world’s poor should be satisfied with leftovers,” Tedros told a news conference, adding that he is “appalled” that some comments by a leading pharmaceutical association this week about the global supply chain being strong enough to support both vaccines and booster shots.

Israel, Britain, Denmark, France, Germany, Spain, and the United States recently started either implementing a booster program or are working on doing so.

“A month ago, I called for a global moratorium on booster doses, at least until the end of September to prioritize vaccinating the most at risk people around the world who are yet to receive their first dose,” Tedros added. “There has been little change in the global situation since then.”

“So today, I’m calling for an extension of the moratorium until at least the end of the year to enable every country to vaccinate at least 40 percent of its population,” he said.

So far, according to the WHO, about 5.5 billion vaccine doses have been administered globally but mostly in wealthier countries.

“We don’t want any more promises. We just want the vaccines,” said Tedros.

It’s not clear what action the WHO or Tedros could take—if any—should those wealthier nations continue pursuing additional shots.

Last month, White House press secretary Jen Psaki and U.S. Surgeon General Vivek Murthy said that the WHO’s calls for a moratorium on booster doses are immaterial because the United States can provide both the booster shots and initial vaccines to countries that need them.

Murthy and other federal health officials said they are targeting Sept. 20 to rollout third doses of the Pfizer and Moderna vaccines. Over the weekend, Biden administration COVID-19 adviser Anthony Fauci told news outlets that it appears likely the Food and Drug Administration will approve the third Pfizer shot before the Moderna shot.

Another WHO official, Dr. Mike Ryan, also separately said that COVID-19, the illness caused by the CCP (Chinese Communist Party) virus, will stick around and become akin to influenza.

“People have said we’re going to eliminate or eradicate the virus,” Ryan remarked during a separate news conference. “No we’re not, very, very unlikely.”