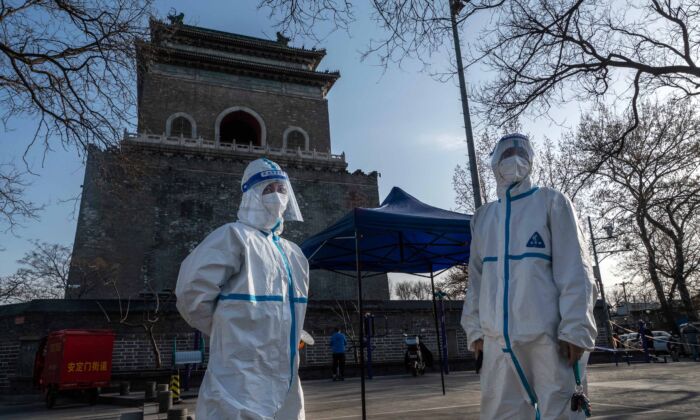 An expert panel convened by the World Health Organization (WHO) said the virus that causes COVID-19 is likely from animals, probably bats, but further data are needed to explain how the virus jumped to humans, including the possibility of a lab-leak incident.

In its first report released on June 9, the WHO’s scientific advisory group recommended “further investigations” to evaluate whether a laboratory incident is a pathway to humans and other possible scenarios, though it said there “has not been any new data made available” to assess the lab-leak theory.

The stance marks a sharp reversal of the agency’s initial report on the virus’s origin in March 2021, which ruled that a lab origin was “extremely unlikely.”

The new report also mentioned that lab accidents in the past had triggered some outbreaks, so the theory could not be discounted.

“All hypotheses must remain on the table until we have evidence that enables us to rule certain hypotheses in or out,” WHO’s director-general Tedros Adhanom Ghebreyesus said at a June 9 press conference.

“This make[s] it all the more urgent that this scientific work be kept separate from politics.”

But this may not be an easy job. The report stated in a footnote that three panel members from Russia, Brazil, and China objected to the recommendations, saying there is “no scientific evidence” to question the commission’s previous conclusion from March 2021.

The report was written by a team, named the Scientific Advisory Group for the Origins of Novel Pathogens (SAGO), which was tasked with advising the WHO on investigations into pathogens that might trigger the next pandemic, as well as studying the origins of the current pandemic.

The 27-member group was established last autumn following criticism from a dozen countries that raised concerns about WTO’s COVID-19 origins study, due to a lack of transparency and access to crucial data from China.

The 52-page preliminary report said “key pieces of data” are still missing to determine how the COVID-19 pandemic began.

The group said current data suggested a zoonotic origin of the novel coronavirus. The closest genetically-related virus was beta coronaviruses identified in bats in China and Laos, it added.

“However, so far neither the virus progenitors nor the natural/intermediate hosts or spill-over event to humans have been identified,” it stated.

The scientific advisory group believes the Huanan seafood market in Wuhan, where the first infections were recorded in China, “played an important role early in the amplification of the pandemic.” The team called for further studies into information such as environmental and animal samples taken from the market.

The latest report said Ghebreyesus sent two letters to senior Chinese officials in February requesting information, including details about the earliest human cases of COVID-19 in the city of Wuhan and further information on the lab-leak hypotheses.

It’s unclear whether the Chinese author responded. But previous requests from the U.N. health agency had been declined by the Chinese regime.

Zhao, once again, denied the lab-leak hypothesis, while pushing an unfounded conspiracy theory that the outbreak originated in the United States, even though the virus first emerged in the central Chinese city of Wuhan in late 2020.

The Chinese Communist Party has ramped up its disinformation campaign surrounding the virus originss since early 2020 amid growing calls to probe how its cover-up of the initial outbreak endangered the world.

Jamie Metzl, who sits on an unrelated WHO advisory group, has suggested that the Group of Seven industrialized nations set up their own COVID-19 origins probe, saying WHO lacks the political authority, expertise, and independence to conduct such a critical evaluation.

Metzl welcomed WHO’s call for a further investigation into the lab leak possibility but said it was insufficient.

“Tragically, the Chinese government is still refusing to share essential raw data and will not allow the necessary, full audit of the Wuhan labs,” he told The Associated Press. “Gaining access to this information is critical to both understanding how this pandemic began and preventing future pandemics.”

In Washington, a Republican-led subcommittee in the House of Representatives on the COVID-19 pandemic wrote in a tweet: “Americans were smeared as ‘conspiracy theorists’ for asking whether #COVID19 came from a lab leak. Now, the WHO is asking the same questions.”

“WE NEED ANSWERS,” added the committee, which is headed by Rep. Steve Scalise of Louisiana.

Eva Fu and The Associated Press contributed to the report.