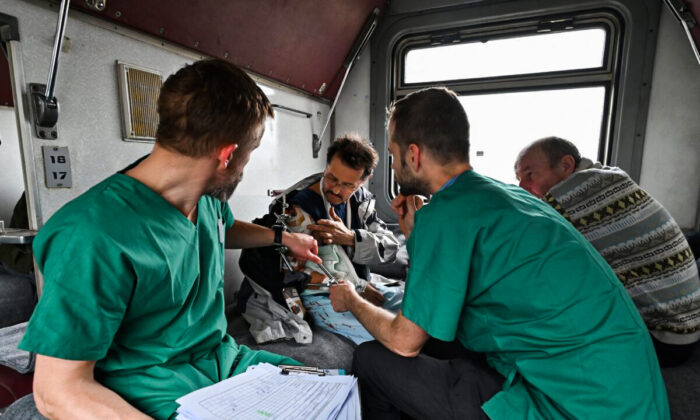 MSF doctors Stig Walravens (2nd R), 33, and Yaroslav (L), 39, care for Oleh, 58, a patient on a medical evacuation train on its way to the western Ukrainian city of Lviv on April 10, 2022. (Genya Savilov/AFP via Getty Images)
Russia-Ukraine War

WHO Condemns Russian Aggression That Resulted in Ukrainian Health Crisis

The World Health Organization passed a resolution Thursday addressing the Ukrainian health crisis that began with Russian aggression, while rejecting a similar counter-proposal from Russia that failed to mention the country’s role in the war.

The “Health emergency in Ukraine and refugee receiving and hosting countries, stemming from the Russian Federation’s aggression” draft proposal was passed with 88 yes votes, 12 nos, and 53 abstentions during the organization’s 75th World Health Assembly in Geneva, Switzerland.

The original proposal (pdf) published on May 23, brought by the United States and 46 other nations, including the UK, Australia, Germany, France, Japan, and Turkey, condemned the Russian military incursion which began on Feb. 24, and requested WHO to “consider temporarily suspending all regional meetings” in the country until a peaceful resolution has been reached and Russia withdraws its forces from Ukraine.

The proposal did not ask WHO to suspend Russia’s voting rights at the agency.

The resolution talked about the “ongoing health emergency” that includes “conflict-related trauma and injuries,” spreading of infectious diseases, mental health deterioration, human trafficking; and disrupted health services to those vulnerable like women, children, and the elderly. It adds that it pertains not only to people in Ukraine but Ukrainian refugees fleeing to neighboring countries as well.

It urged “the Russian Federation to immediately cease any attacks on hospitals and other healthcare facilities,” and “fully respect and protect all medical personnel and humanitarian personnel exclusively engaged in medical duties.”

Furthermore, the proposal encouraged fellow members to increase contributions towards the WHO emergency programs focusing on Ukraine.

The Russian proposal (pdf) similarly condemned “attacks directed against civilians and health objects,” and called on “all parties to respect and protect humanitarian personnel, their facilities, equipment, transport and supplies and to ensure the safe and unhindered access of humanitarian personnel,” without mentioning Russian aggression or the country’s role in the humanitarian crisis.

Yevheniia Filipenko, Ukraine’s ambassador to the United Nations, called Russia’s counter-proposal, co-signed with Syria, a “twisted alternative reality,” according to Reuters as WHO members collectively rejected the proposal.

The WHO has been keeping track of the Ukraine situation through its Surveillance System for Attacks on Health Care (SSA).

Based on SSA data, since the Russian invasion, there have been 263 attacks, 75 deaths, and 59 injuries related to health care in Ukraine.

Out of these, 238 attacks impacted health care facilities, such as the bombing of a maternity hospital in Mariupol. It recorded 29 attacks each on transport and personnel working in the sector, 77 attacks that impacted supplies, and 17 attacks on patients.

Most of the attacks involved heavy weapons and happened in March.

Meanwhile, Beijing supported Moscow in the two votes. The country’s envoy, Yang Zhilun, claimed that WHO was not the right platform to discuss Ukraine’s health problems.