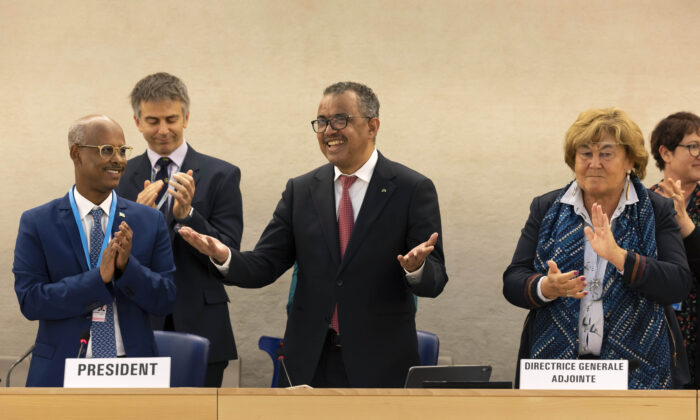 Tedros Adhanom Ghebreyesus, Director General of the World Health Organization (WHO) (C), celebrates his reelection, during the 75th World Health Assembly at the European headquarters of the United Nations in Geneva, on May 24, 2022. (Salvatore Di Nolfi/Keystone via AP)
International

Tedros, a former government minister from Ethiopia, has directed WHO throughout its management of the global response to COVID-19 and withstood criticism over its multiple missteps. He is the first African to lead the agency and the only director-general not qualified as a medical doctor.

He is also the first WHO leader not to be supported by their home country; Ethiopia has previously accused Tedros of “ misconduct ” after his sharp criticism of the war and humanitarian crisis there and raised concerns about his leadership on Tuesday.

Under Tedros, the U.N. health agency failed to call out countries including China for blunders that WHO officials grumbled about privately, advised against mask-wearing for months, and said initially that the coronavirus wasn’t likely to mutate rapidly. Scientists drafted by WHO to investigate the coronavirus’ origins in China said the critical probe was “ stalled ” last year, after issuing a report that even Tedros acknowledged had prematurely ruled out the possibility of a laboratory leak.

Critics say Tedros has failed on some fundamental issues, like holding staff accountable after allegations that dozens of outbreak workers managed by WHO sexually abused young women in Congo during an Ebola outbreak that began in 2018, in one of the biggest sex scandals in U.N. history. None of the senior WHO managers alerted to the abuse allegations and who did little to stop the exploitation, have been fired.

As Tedros begins his second term, some experts have also raised concerns that WHO isn’t fulfilling its primary role as a technical agency providing science-based guidance to countries.

Dr. David Tomlinson, a cardiologist who has campaigned for better protective equipment for health workers in Britain’s health system, says he has been appalled by WHO advice, most notably their reluctance to acknowledge that COVID-19 is widely spread in the air. In July 2020, more than 230 scientists published a paper appealing to WHO to recognize the coronavirus was airborne; that later prompted the organization to alter some of its recommendations.