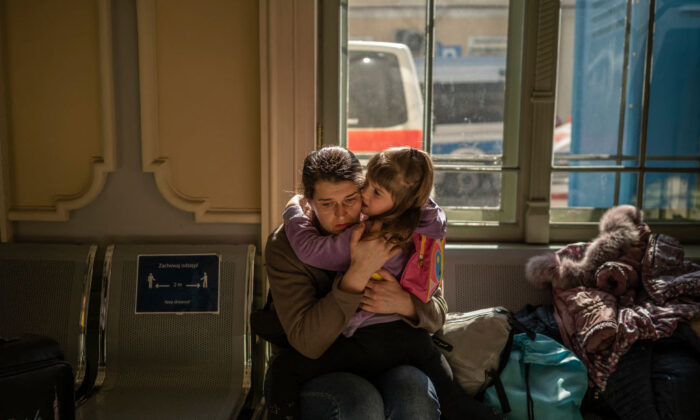 A Ukrainian evacuee hugs a child in the train station in Przemysl, near the Polish-Ukrainian border, on March 22, 2022. (Angelos Tzortzinis/AFP via Getty Images)
Viewpoints

Who Can Cast the First Stone Over Ukraine?

The old saying “to know all is to forgive all” means if taken literally, that all the evils of the world would be forgivable if we took the trouble to discover the real reasons for them. Those who actually believe this reveal themselves as optimists, generous in spirit, willing to look for the best in human nature.

But most of us, hardened by the experience of history, are inclined to be more sceptical: the brutish cruelties of a Stalin or a Hitler may be explicable, by some feat of psychological analysis, but are surely beyond excuse or pardon.

What kind of justification can we find for Putin’s aggression in Ukraine? Even to write that sentence is to invite an angry response from most people today, for we are all appalled by the sufferings of the Ukrainian people and disgusted by the ruthless destructiveness of the Russian military. However, to look for excuses seems like a betrayal of the innocent.

But the situation is complex. Ukraine has an ancient history of great brilliance, and Kyiv may even claim, with justice, to be honoured as the most important seat of Christian Slav civilisation.

But centuries of division and annexation followed that golden age, and Ukraine became a part of Tsarist Russia in the late 18th century. Throughout the 19th century, it was the major component of that nominally united nation, after Russia itself.

After a very brief period of independence at the time of the revolution, Ukraine was re-absorbed and subjugated with savage cruelty but remained the second most important state of the USSR until its final dissolution.

During that whole period of nearly two centuries, there was considerable population movement in both directions, and current native Russian speakers form a significant minority, particularly in the Eastern regions.

So why is Russia so determined to regain control? Is this whole campaign no more than an act of insane petulance or crazy empire-building initiated by a leader hell-bent on restoring the old federation? Is he mad enough to unleash even nuclear war on the world, as some of the western media suggest?

We may not readily forgive our enemies, but it is always good policy to understand them, to find out what makes them tick. And the first thing we have to acknowledge, which is also the hardest for us to grasp, is the deep resentment in Russian hearts towards a world apparently dominated by English-speaking nations.

This cannot be exaggerated.

It has also been a powerful motivation for the policies of many countries other than Russia: Germany in two world wars; France, from time to time; various post-colonial countries such as Zimbabwe; Libya and a great many Muslim states; China and Japan. All these have, at some stage, reacted bitterly against what they saw as the hegemony of the anglophone West.

In the quest to understand, we might also consider the mental state of people who live with ill-defined or exposed borders.

Those of us who are “islanders” (Australians, Britons, Sri Lankans, Japanese) tend to have a cosy view of the world: it’s easy to think objectively about other nations when they are separated from us by sea.

Italians have a whole peninsula to themselves. France and Spain, Canada and the United States have borders with other nations, yet they still possess large and clearly-defined areas with extensive coastlines.

To all of us, the situation and the mentality of countries like Poland, Hungary, Moldova, Ukraine, and even Russia itself—their territory invaded, sequestered, annexed, squabbled over for centuries—is almost unimaginable.

Let me propose another example of a politically-driven military campaign from another hemisphere, one which will be deemed highly inappropriate and offensive by many who read it.

In 1861, the United States had been federated and independent for only 80 years. The defection of the Confederacy, despite its popularity within its own territory, could not be tolerated by the U.S. government, and a bitter and costly war was fought to recover it.

The goal was to retake lands that had traditionally belonged to the United States.

Everybody knows how General William Sherman, in his devastating march through Georgia, claimed that “war is hell.” But what is seldom appreciated is that he meant to make it so—that he and his government considered it necessary to wreak such utter destruction on the Confederacy and its people so that the spirit of rebellion would be forever quashed.

Is this a fair comparison? Many would dispute it. After all, Ukrainians and Russians speak different (though closely related) languages, whereas in the United States, north and south both speak more or less the same English.

There was no mass exodus of refugees from the south to other countries because that was not an age of easy travel, nor were there, in any case, neighbouring countries to escape to.

Yes, the comparison falls down on a number of points, but the essential fact remains that one nation believed that there was a valid case for recovering territories that it believed belonged to it by tradition and right.

Readers who have persisted to this point may have concluded that I am defending or justifying the Russian action against Ukraine. That is certainly not true. In fact, I hope for a total withdrawal and for an immediate end to the killing. War should never be a solution to anything, and the Russian aggression is in every way unconscionable.

But if history has taught us anything, it is that human beings have a poor record and that no nation on earth has clean hands.

In our justifiable condemnation of Russia, we do well to examine our own varied histories and to ask ourselves: who, if anyone, can cast the first stone?