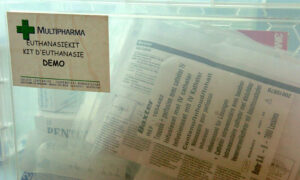 When Is Legalized Suicide Acceptable, and When Is It Not?
0
Share Now
TelegramFacebookTweetEmailTellMeWeReddit
Copy Link 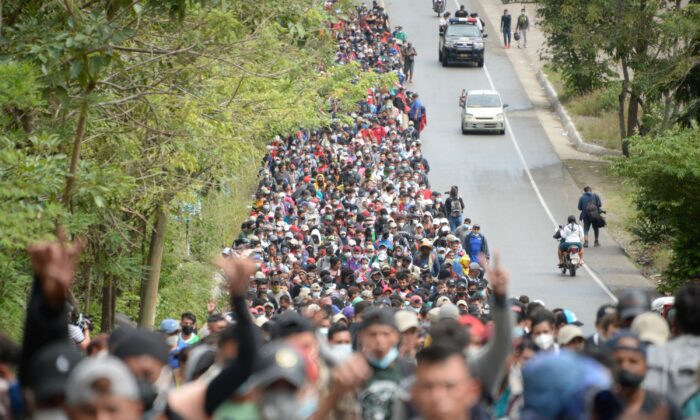 Honduran migrants, part of a caravan heading to the United States, walk along a road in Camotan, Guatemala on Jan. 16, 2021. (Johan Ordonez/AFP via Getty Images)
Viewpoints

Let’s talk calmly and objectively about U.S. immigration policy, shall we? And let’s focus on what’s happened so far this year following our nation’s latest changes in strategy. Those changes have sparked an unprecedented flood of refugees across our southern border.

The U.S. Border Patrol reports that during the month of May, agents grappled with more than 180,000 migrants. In April, the number was 178,000. A government estimate says we are on track to handle more than 2 million immigrants entering via the southern border by the end of this fiscal year. That doesn’t count all the other immigrants who enter the United States legally.

No matter how often administration officials tell potential refugees, “Do not come,” or declare that “the border is closed,” the truth is that massive numbers of immigrants continue to come across the U.S.–Mexican border, and that border is as leaky as a spaghetti sieve.

Don’t be fooled by statements that “a vast majority of the people will be turned away” from the border. Nope, most don’t show up at official checkpoints. The majority of today’s immigrants are being dropped off by money-grubbing handlers at wide-open spots along the southern border, forced to travel on foot the rest of the way. They also arrive clinging to the undercarriage of railroad cars or take the journey via boats that drop them near the California coastline. Some are greeted by U.S. authorities. Others, the “got-aways,” simply disappear into the United States. Texas has been particularly overrun with migrants, as have New Mexico and Arizona.

The success of getting to the United States from Central America—or any other country, for that matter—largely depends on help from vicious drug cartel coyotes. It is frightening to realize what can happen to migrants (including young children) who travel this dangerous route.

FBI Director Christopher Wray says the cartels track these refugees and force them to do cartel work while in the United States. Testifying before the House Judiciary Committee this month, Wray painted a bleak future for immigrants who are intimidated into either trafficking illegal drugs or participating in prostitution rings.

The migrants, he said, must do what they are told or face savage retaliation either against themselves, a loved one in the United States, or a family member back in their home country. They fear deportation if they ask the police for help. Some caught in this web may never escape a life of exploitation.

Also, think about those immigrants who get to the United States, take the chance to ignore the order to return for their prescribed court date, and then must look over their shoulder for years worried they’ll be caught. Living life under the radar ensures living in poverty and fear: menial jobs, inadequate health care, and education, and not a chance of becoming a legal home or business owner. The American dream (whatever that is these days) is never quite within their reach. If they had entered the United States legally, they could enjoy all this country has to offer.

One more important point. While our overwhelmed Border Patrol is distracted with processing throngs of migrants each day, the Mexican cartels’ grand scheme is flourishing. They successfully send countless drug mules to slip across remote areas of our border carrying massive quantities of illegal drugs. Last year—a year in which Americans were supposedly isolated at home and away from their dealers—there were still more than 87,000 overdose deaths, most attributed to fentanyl from Mexico.

This column is designed to make Americans aware of what actually happens to many migrants once they get here. Is it a better life from where they came? Yes, for some of them. But when the tendrils of Mexican drug cartels reach deep into the United States and squeeze freedom from these new arrivals, then no one wins.

Politics has gotten us to where we are today. If we are ever to come to a fair solution to the immigration situation—fair to U.S. taxpayers and to the newcomers—we must first be honest about the consequences of the current policy. It isn’t working.