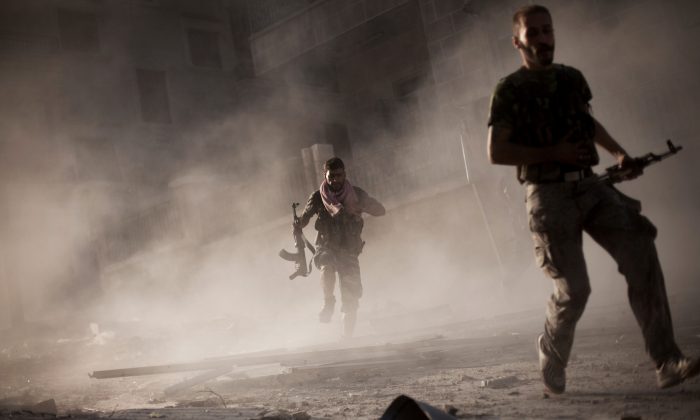 Who Are Syria’s Anti-Assad Forces?

When the Arab Spring hit Syria in 2011, few would have predicted that a simple uprising in Deraa would lead to full-blown conflict with over 250,000 dead and millions fleeing the country.

The original opposition to Bashar al-Assad’s regime appeared to be a combination of secular and moderate religious forces committed to democracy, human rights, and ridding the country of corruption. But just like the chaos thrown up by the Lebanese Civil War, the Syrian conflict has given birth to over 1,000 different militias, making it devilishly hard to distinguish who’s fighting for what.

Provided it has free access to arms, any group can form a militia—and though many of the militias are anti-Assad forces, they also complicate matters by fighting each other.

Though there are an estimated 300,000-plus fighters across anti-Assad forces, these groups are not fighting on a united front, and the alliances among them are constantly shifting. Many groups have splintered off after disagreements, and rebel groups have had to shift their attention from fighting Assad to fighting extremists.

So with Russia’s recent strikes against what it has opaquely called “anti-Assad forces,” it pays to ask just who the main groups opposing the Damascus regime actually are.

Alongside extremist Islamist groups, the opposition includes moderates, secularists, and Kurdish groups. The Syrian Revolutionary Command Council (sometimes referred to as the Syrian National Coalition) is the primary secular faction, though it does include a number of Islamist militias. This alliance of 72 factions was formed in August 2014 to help the anti-Assad forces co-ordinate better. It has received support from both the West and Saudi Arabia.

The council’s most notable coalition member is the Free Syrian Army (FSA), which since 2012 has been led by Abdul-Ilah al-Bashir. The FSA was initially able to co-ordinate effectively on the battlefield, but has struggled to capitalize on its early success.

Though overshadowed by new jihadist groups, the FSA still has over 50,000 fighters, many of whom had military experience as soldiers in the Syrian Army. The group has a constitution and bylaws to govern the affairs of its members, and appears to be committed to democratic ideals.

Then there are other Islamist groups neither allied with the Syrian Revolutionary Command Council nor affiliated with either al-Qaeda or Islamic State (ISIS). And not all of them have always been considered dangerous by the West.

Most notable among them is the Islamic Front, which formed in November 2013. At one point it had somewhere between 40,000-70,000 fighters, but it suffered heavy losses after ISIS emerged in Syria, and there are now conflicting reports on its strength. The group claims to work in limited co-operation with other opposition factions, and it continues to receive support from Saudi Arabia.

Meanwhile, while most media attention has gone to groups that have been affiliated with al-Qaeda, the most effective group in this bloc is in fact the Nusra Front.

The Nusra Front began in Iraq in August 2011, when the leader of Islamic State in Iraq, Abu Bakr al-Baghdadi, authorized the creation of a Syrian offshoot of al-Qaeda in August 2011. It began recruiting Islamists released from prison in Syria who were already fighting Assad and Syrians who were already in Iraq fighting U.S.-led coalition forces under Abu Musab al-Zarqawi, the leader of al-Qaeda in Iraq.

The Nusra Front’s forces are particularly aggressive, successful, and well-trained. Though the West supported it when it seemed to be an arm of the FSA, that changed in December 2012 when it became clear that the group was affiliated with al-Qaeda—which it is to this day.

Though the Nusra Front was also initially affiliated with ISIS while ISIS and al-Qaeda were allies, that ended when ISIS’s al-Baghdadi moved to fully absorb the Nusra Front into his group. Al-Qaeda’s leadership officially cut ties with ISIS in February 2014, which ended the Nusra Front and ISIS’ relationship as well.

ISIS, meanwhile, is still operating on a scale none of the other groups can hope to match. It claims to have over 100,000 fighters, a figure Middle Eastern governments have repeated (Western sources claim it has around 30,000) and has taken control over parts of Eastern Syria and Northern Iraq. No longer tied to al-Qaeda, it now controls territory roughly equal in area to the U.K., though it may have recently lost territory in Iraq. As many as 10 million people may now be living under its control.

Considered the most extremist and brutal of Syria’s opposition groups, ISIS so far seems to have avoided any direct head-to-head confrontations with Assad directly—perhaps part of the reason Assad’s newly interventionist ally, Russia, has apparently declined to strike ISIS directly.

The group has a budget of $2 billion a year and sustains itself through extortion, human trafficking, kidnapping, and oil sales, to name but a few.

But ISIS is not the only organized group controlling a substantial chunk of Syria. There is also a confederation of Kurdish forces fighting under the Kurdish Supreme Committee. These groups have also received support from various Kurdish parties, including the Kurdish Workers Party and the Kurdish Democratic Union Party.

The People’s Protection Unit, the armed link of the committee, counts among its ranks more than 50,000 fighters, and it claims to control an area of Northern Syria as large as Qatar and Kuwait combined.

So whatever the complexity of the relationship between Russia, United States, and rest of Europe, they can’t hold a candle to the dizzying array of allies and enemies fighting on the ground.

Natasha Ezrow is a senior lecturer at the University of Essex in the U.K. This article was originally published on The Conversation.