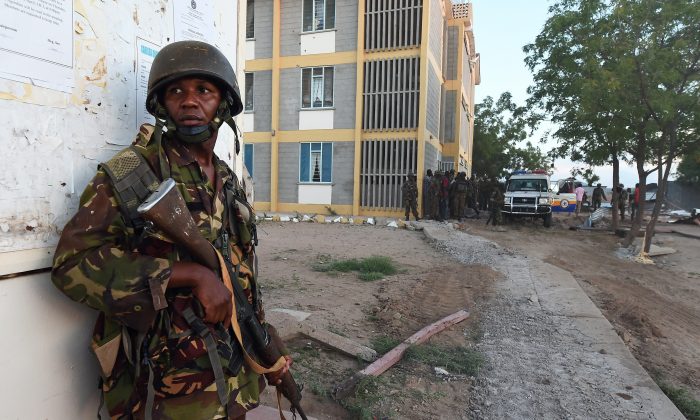 A member of the Kenyan Defence Forces stands guard at the Garissa University campus after an attack by Somalia's Al-Qaeda-linked Shebab gunmen in Garissa on April 2, 2015. At least 70 students were massacred when Somalia's Shebab Islamist group attacked a Kenyan university today, the interior minister said, the deadliest attack in the country since US embassy bombings in 1998. AFP PHOTO / CARL DE SOUZA (Photo credit should read CARL DE SOUZA/AFP/Getty Images)
Africa

Who Is Al-Shabab and Is It a Threat to the US?

For years, the terrorist group al-Shabab has carried out attacks in Somalia and neighboring countries—culminating in Thursday’s attack on Garissa University College in Kenya that left 147 dead and 79 injured, Kenya’s government confirmed.

About a month ago, al-Shabab issued a threat to malls in the United States, including the Mall of America, but a Homeland Security representative said at the time there’s no credible plot against American shopping malls. Homeland Security Secretary Jeh Johnson said in February, “Anytime a terrorist organization calls for an attack on a specific place, we’ve got to take that seriously.”

Some members of al-Shabab are Somali-Americans from places like Minneapolis, New York, New Jersey, and California, the Council on Foreign Relations think tank said.

So, who are Somalia’s al-Shabab?

It has been deemed a terrorist organization aligned with al-Qaeda, and the group’s name means “The Youth” in Arabic. It started off as a radical wing of Somalia’s Union of Islamic Courts, which controlled the Somali capital, Mogadishu, in 2006.

The group is said to have between 7,000 and 9,000 fighters, mostly in Somalia. In recent years, a Kenya-led African Union military campaign has forced al-Shabab out of major cities in Somalia, weakening the group significantly. It left Mogadishu in 2011 and fled the port city of Kismayo in 2012.

But even so, “security analysts warn that the group remains the principal threat in a politically volatile, war-torn state,” said the CFR. The group has claimed responsibility for the deadly terrorist attacks in Uganda’s capital in 2010 and the Nairobi mall attack in 2013 that killed at least 68 people.

Like ISIS, the Taliban, and other terrorist groups, al-Shabab attempts to implement its strict interpretation of Shariah in areas under its control. The terrorist group is known to stone women to death and amputate the hands of thieves.

Last week, the group released a video that appears to show the mass execution of civilians. The video, called “Remembrance 2,” shows masked terrorists shooting and killing Somali men with assault rifles on a beach.

What is al-Shabab trying to accomplish?

“Many analysts say the group is not monolithic and its objectives vary,” CFR noted, adding that there are “competing clan loyalties and rifts between the group’s nationalists intent on ousting” the African Union forces and the central government, while others aim for “transnational terror” operations.

There’s also been a U.S. strategy to destabilize al-Shabab in Somalia. U.S. drone strikes and special operations raids are used to attack the group, while Washington has provided $500 million to train and equip African Union soldiers.

The longtime spokesman for al-Shabab, Sheikh Ali Mohamud Rage, confirmed the group was behind Thursday’s terrorist attack. “Kenya is at war with Somalia,” Rage said, according to Kenya’s The Nation.

In addition to the 147 dead, Kenya’s Interior Ministry confirmed via Twitter that the siege was over and 79 were left injured, and 587 people had been evacuated.

Police identified a possible mastermind of the attack as Mohammed Mohamud, who is alleged to lead al-Shabab’s cross-border raids into Kenya. Authorities posted a $220,000 bounty for him. Also known by the names Dulyadin and Gamadhere, he was a teacher at an Islamic religious school, or madrassa, and claimed responsibility for a bus attack in Makka, Kenya, in November that killed 28 people.

One of the survivors of Thursday’s attack, Collins Wetangula, told The Associated Press he was preparing to take a shower when he heard gunshots coming from Tana dorm, which hosts both men and women, 150 meters (164 yards) away. The campus has six dorms and at least 887 students, he said.

When he heard the gunshots, he locked himself and three roommates in their room, said Wetangula, who is vice chairman of the university’s student union.