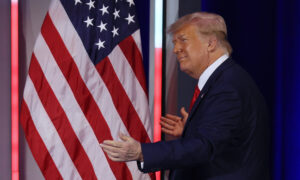 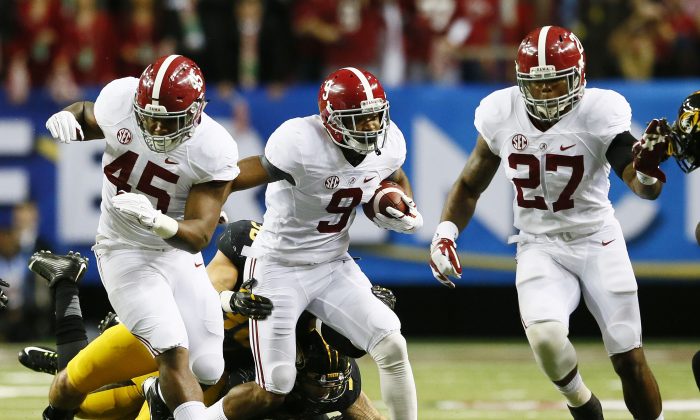 The Alabama Crimson Tide (with the ball) against the Missouri Tigers in the SEC Championship game in Atlanta on Dec. 6, 2014. (Kevin C. Cox/Getty Images)
Opinion

Parents, government officials, and tuition-paying students are all seeking solutions to the skyrocketing costs of higher education and the burden of student debt.

Currently, public universities in America are funded in a number of ways: government subsidies, research grants, donations, sponsorships, and, of course, tuition and fee payments. When debating cost-cutting measures, many propose lowering tuition. Typically, ancillary costs—such as the amount of fees students must pay on top of tuition—are ignored.

But according to the Center for College Affordability and Productivity these fees are increasing at rate 13 percent higher than tuition.

Often the breakdown of these fees (which, at public institutions, can run, on average, an extra $2,000–5,000 per year), is not specific or transparent to the student. Factor in future interest payments for students who are using loans to pay for college, and the costs of these fees to the student can be much higher.

By far, the largest student fee is the last—the intercollegiate athletic fee—which can be upward of 80 percent of the total fee amount at many institutions not in Power Five conferences.

Conventional wisdom says that intercollegiate athletics is a boon to colleges and universities, is wildly profitable, attracts new students, enhances fundraising, and boosts the university’s profile. Yet these are myths, often perpetuated by the media—and by the universities themselves.

The truth is that very few college athletic programs make a profit; instead, most are heavily subsidized by student fees and other institutional subsidies. Furthermore, these fee amounts aren’t static. They’re increasing annually.

The costs of maintaining an intercollegiate athletics program at the Division I for-profit level are immense. There’s a vigorous off-the-field arms race for the building the most attractive facilities and bringing in big-name coaches. Then there are travel and recruiting budgets, along with scholarships. These are only a few of the high-end costs, and schools like the University of Texas—with outside money flowing in from huge TV contracts, sponsorships, and boosters—can afford to do these things because they have an overall athletic budget in excess of $150 million.

Most MAC schools have athletic budgets barely approaching $20 million and no access to the TV revenue of the major schools—yet are desperately trying to keep up by charging subsidies.

In addition there is ample empirical research—from the prestigious Knight Commission on Intercollegiate Athletics and even from the NCAA—that challenges the claim that a university’s athletic program is a significant indicator of its worth, profile, or marketability. While there certainly have been tangible and intangible benefits for major NCAA Division I schools like Ohio State and Alabama, whether or not they turn a profit varies by year. Meanwhile, athletic powerhouses like Oregon and Florida State University require institutional subsidies to balance the books and fund their programs.

I recently completed an empirical research study with co-authors Jeff Smith, of the University of South Carolina-Upstate and two Duke University Graduate Students, Jonathan Robe and Dan Garrett. We researched student perceptions of the athletic fee in the Mid American conference (MAC), one of the most highly subsidized Division I conferences in the NCAA.

The study, due to come out in the January issue of The Journal of Sport, showed that students were largely unaware of these fee amounts, and how much it was allocated for intercollegiate athletics.

The athletic fee wasn’t obvious (in fact, it wasn’t even itemized) on university bills. Furthermore, getting the exact number from MAC institutions proved exasperating.

Considering the total fees assessed to fund athletics at MAC institutions, it’s clear why schools weren’t exactly transparent about the fee. Once the actual fee amount was detailed to the surveyed population of students, over 90 percent were either against the athletic fee or wanted it substantially lowered.

The University of Alabama–Birmingham recently announced that it was going to shut down its Division I football program. In its explanation, the administration outlined the future costs that the university and its students would have to bear just to keep football afloat.

UAB, like a number of schools in the MAC, is never going to be an athletic powerhouse, like its larger sister school, Alabama (in Tuscaloosa). It was going to continue to be an annual, multimillion-dollar charge to the school—with its students footing the most of the bill.

While it might be surprising to the college sports fan that college sports is mostly a money-losing operation, it’s time to reassess where intercollegiate athletics fits within the skyrocketing costs of higher education.

David Ridpath is an associate professor and Kahandas Nandola professor of sports administration at Ohio University. This article previously published on TheConversation.com.