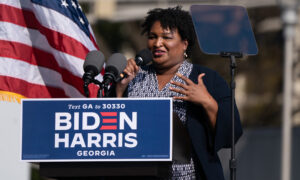 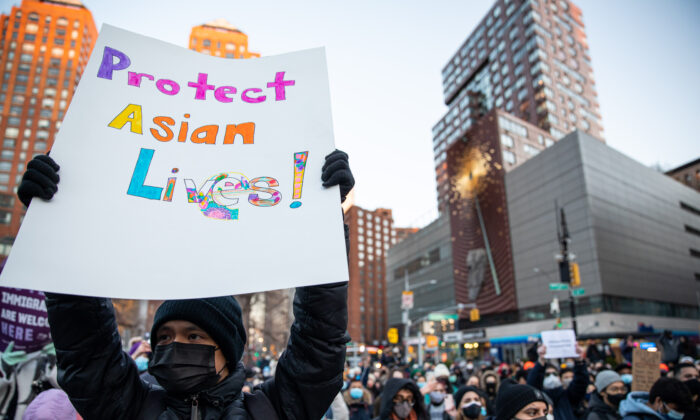 Who Actually Benefits From the ‘Stop Asian Hate’ Movement?

The recent shooting of massage parlor workers in Atlanta has sparked a string of anti-Asian hate demonstrations throughout the country.

In the United States, the issue of systemic racial discrimination is complex. There are several key points that stand in the way of me being able to agree that systemic racial oppression exists today in the form of white Americans specifically targeting people of color. More importantly, as someone who was raised in communist China, I’m wary that political entities are happy to wield radical equality rhetoric for political capital.

The latest U.S. Department of Justice hate crime data was compiled in 2019. The DOJ did report that the largest motivator for hate crimes was racial and ethnic bias, accounting for 57.6 percent of all hate crimes.

It also detailed the racial identity of offenders: 52.5 percent of all known hate crime offenders were white, while 23.9 percent were black, with 14.6 percent of offenders being of unknown racial origin, the report said.

In America, it’s not one specific racial group committing hate crimes specifically against another singular racial group. It’s my opinion that most of the crimes in the United States aren’t actually targeted at specific ethnic groups. Sometimes shops in Chinatown are robbed and the looter may not think too much about the ethnicity of the shop owner; his goal is just to get money, not to commit a race-based hate crime.

Affirmative action seeks to balance educational opportunities on the merit of race. Students of Chinese and/or Jewish heritage tend to have better school performance due to their cultural emphasis on the importance of education and the family. However, these same cultural groups that exhibit overwhelming rates of high academic performance are forced to compete for less academic opportunity on the basis of “equality.”

This is a systemic legal process utilized in America today, and the primary beneficiaries are not whites but black and Latino students.

The Chinese American Citizens Alliance (CACA) of Greater New York said in a statement: “CRT wants to drive Asians out of the best schools. They believe Asians account for too much of the student population. CRT is today’s Chinese Exclusion Act. CRT is the real hate crime to deal with.

“CRT appears in our workplace under the cover of implicit bias/sensitivity training. It pretends to be a culturally/racially sensitive pedagogy and penetrates our schools. Its courses include The New York Times’ 1619 Project and the proposed ethnic mathematics curriculum in Seattle. Hate groups, with allies in politics, the press, and education, pass CRT as anti-racism and diversity, equality, and inclusion. But CRT is exactly the opposite. From its very roots, CRT is racist, oppressive, and divisive.”

CRT is the belief that legal institutions have no positive role for society and are fundamentally racist because they have been constructed by white people to further their economic and political interests at the expense of all people of color. The theory has been harnessed as a powerful political weapon by Democrat progressives.

Actually, left-leaning media tends to hesitate in highlighting harm and hatred perpetrated against Asians. The New York Times asserts that the hatred against Asian Americans is due to Trump’s use of the term “China virus” as a name for COVID-19. This statement is ridiculous because Asian people in the United States know very well that the generalized discrimination of Asians in America existed long before Trump’s election in 2016—although it was not made a topical issue in the media.

I’ve noticed in the past that leftist media turned a blind eye to discrimination against Asian Americans because Asians on average don’t fall into the “colored people are oppressed” narrative that has been weaponized by the CRT movement.

Many leftists identify Asians as white accomplices and as beneficiaries of the oppressive society inherent in the United States. They believe that Asians, as a racial group, should be criticized.

In the past, Asians would express their opposition to discrimination, because in the United States the term discrimination is a commonly used term. But the position of this movement is “against the expression of hatred,” not “discrimination.” Hatred and discrimination may be similar terms, but they’re not the same.

Over the past year or so, there’s been more and more division within the Democrat party. The extreme left in the Democrat Party differs massively from the Democrat centrists. They need a landmark event, or landmark movement, to bring their party’s supporters together.

But this campaign against “hate” will surely come to an end with little progress.

Amid calls to end the hate of Asians, I want to point out that there are groups in the United States who are actively calling for the destruction of the United States for what they call “imperialist crimes.” They claim that communist China is their true homeland and vigorously promote patriotism for the Chinese Communist Party (CCP) in the United States. Americans must be careful.

The virus of communism has begun to break out in the United States. These people are hidden in the Democrat Party, taking form as the Democrat Party’s radical leftists. Their promises are slogans like equality and eliminating racial hate, but these Marxist and communist slogans have historically proven unreliable and dangerous.

In mainland China in the late 1940s, the CCP fought a civil war to seize power from the Chinese Nationalist Party. All CCP media promoted “democracy” and “freedom” and “equality.” The rhetoric loudly demanded universal suffrage, decried a “one-party dictatorship” and opposed a political party controlling the army. They vigorously praised Western democracy, especially the United States. A large number of Chinese people and intellectuals, dissatisfied with the dynastic rule of government, supported the CCP.

But once the Communist Party took power in China, all talk of democracy stopped, universal suffrage disappeared from the dictionary, and demands for nationalization of the military were silenced. Two million Chinese intellectual elites were sent to prison.

Just like the slogans propagated by the CCP in the last century, we need to be particularly vigilant about such movements today that flaunt the banner of “equality” as their political fuel.