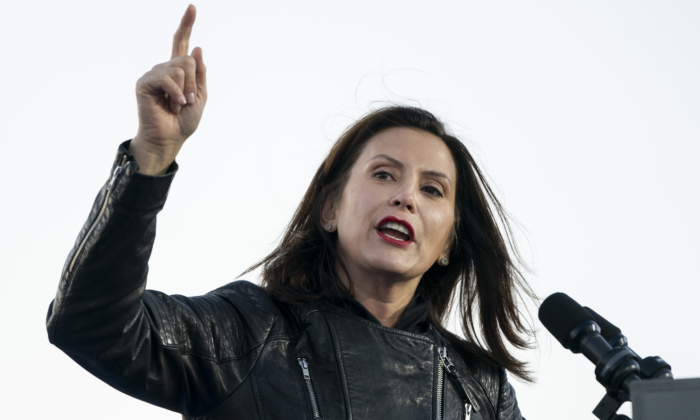 The bills—Senate Bills 303 and 304, and House Bill 5007—would have prohibited election officials from accepting donations, toughened in-person voter identification rules, required people to provide additional information on absentee ballot applications such as their driver’s license number or state ID number, instead of only a signature.

The measures would have also banned the Secretary of State’s Office and township or city clerks from providing absentee ballot applications unless specifically requested by a voter, and removed a $10 fee to obtain or renew a state ID card.

“These bills would disproportionately harm communities of color. … Non-white voters were about five times more likely to lack access to ID on election day than white voters,” the Democratic governor wrote in a letter to lawmakers on Friday. “Voter restrictions that produce such a racially disparate impact must never become law in this state.”

All three bills passed the Legislature earlier in October, mainly along party-line votes. Republicans backing the measures argue they would boost election confidence.

Senate Elections Committee Chair, Sen. Ruth Johnson, a Republican, said in a statement that by vetoing the measures, the governor is “rejecting nearly 80% of Michigan voters who support requiring every voter coming to the polls to present a government-issued ID to cast their ballot—including over 58% of voters in her own party,” citing a Detroit Regional Chamber poll conducted in May.

Critics of the measures have argued that it would make it harder to vote in the state.

“These bills are out of step with what we know Michigan voters want, a voting system that works for everyone,” said Sharon Dolente, senior adviser for Promote the Vote. “Michigan law already requires voters to verify their identity prior to voting. These bills would impose a radically restrictive identity verification scheme rejected by 42 states.”

A ballot committee, called Secure MI Vote, is currently circulating petitions that would allow the state Legislature to still enact similar changes in 2022 without Whitmer’s signature—guaranteed that the petitions receive roughly 340,000 valid signatures by the end of six months.

“The governor may have vetoed this bill now, but once we finish this process, she will not be able to stop these changes,” Jamie Roe, a spokesman for the GOP-backed ballot committee said in a statement.

The group’s petition language was approved by the Michigan Board of Canvassers on Sept. 27, and it has been gathering signatures since then. The committee’s petition would prohibit private entities from donating money to election officials and would ban the Secretary of State’s Office and clerks from providing absentee ballot applications unless specifically requested by a voter, among other changes—similar to changes proposed by lawmakers in the vetoed bills.