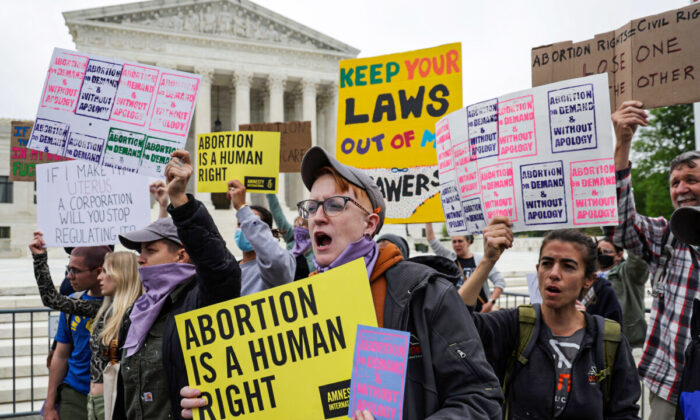 Pro-abortion activists protest in front of the Supreme Court in Washington on May 3, 2022, in response to a leaked draft opinion showing the court's intention to overturn Roe v. Wade. (Alex Wong/Getty Images)
US

Pro-abortion forces led by Michigan’s Governor Gretchen Whitmer, a Democrat, were already actively battling the June 24 decision by the U.S. Supreme Court to overturn Roe v. Wade long before it was handed down.

If anything, the formal announcement of the ruling has only stiffened their resolve.

Leading up to the High Court’s decision, some radical fringe groups, unconnected with Whitmer, are alleged to have resorted to violence as a means of opposing the ruling.

No one was injured but windows and doors were smashed, and the walls were defaced with pro-abortion graffiti.

A neighboring home was similarly vandalized, as well.

In a statement following the incident, Walberg said, “I never shy away from my record as a strong conservative and defender of life.

“This strong record puts me in the crosshairs of those on the radical Left, but I will never stand down or compromise my convictions,” he said.

Passion and intractable convictions motivate both sides in the current political and social upheaval rising from the overturning of Roe v. Wade.

Whitmer has repeatedly, publicly vowed “to fight like hell” for abortion and she has promised to continue to do so in the wake of the decision.

In April, Whitmer and Planned Parenthood each filed a lawsuit asking the state Supreme Court to declare an existing 1931 Michigan statute criminalizing abortion—except in the case of a threat to the life of the mother—unconstitutional.

The plaintiffs allege that the right to an abortion is guaranteed by the Michigan Constitution.

Constitutional lawyer David Kallman of the Great Lakes Justice Center told The Epoch Times, “No right to an abortion exists anywhere in the language of the Michigan Constitution, and no Michigan case law suggests otherwise.”

Now, 49 years later, Roe v. Wade has been struck down and the statute is thought by many legal experts to once again be the law of the state.

In April, citing the urgency of the situation, Whitmer asked the state Supreme Court for an expedited ruling that the 1931 law is not valid.

To date, no decision has been rendered.

Whitmer also sued 13 prosecuting attorneys serving in the 13 Michigan counties in which an abortion clinic is located.

The suits are intended to prevent the county prosecutors from enforcing the revitalized state law, with its tight restrictions on abortion and felony penalties.

Kent County prosecutor Chris Becker, a defendant in the case, told The Epoch Times, “I feel like I’m getting pulled into a reelection campaign. This suit is just a political stunt to make Whitmer look good to her supporters.”

On May 17, at Whitmer’s request, a Michigan Court of Claims judge granted a preliminary injunction enjoining the enforcement of the existing statute.

The injunction is being challenged by Republican legislators.

Months before word of the impending U.S. Supreme Court decision was leaked on May 2, the American Civil Liberties Union, Planned Parenthood, and a coalition called Michigan Voices began circulating a petition to amend the state constitution to make abortion a constitutional right in Michigan.

The group has until July 11 to gather the 420,000 valid signatures needed to place the proposed amendment on the ballot this fall.

In a June 24 press release, Michigan Attorney General Dana Nessel stated, “The overturning of Roe is not just the loss of a right, it is the erosion of our status as equal citizens under the law.

“Now we must do what our courts have failed to do: we must act to ensure that women are not permanently relegated to second-class citizens in this country,

“I will continue to fight for a woman’s right to choose with the full weight of my office.

“Michigan residents must continue to fight for reproductive rights at the ballot box in November,” she said.

In an April 7 statement, Nessel declared, “Let me be very clear, I will not use the resources of my office to defend Michigan’s 1931 statute.”