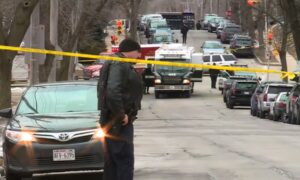 Two white supremacists from Virginia were charged by federal authorities for plotting to attack synagogues and black churches.

According to the Washington Post, the two men were plotting the “shooting or bombing the occupants of black churches and Jewish synagogues” and “conducting acts of violence against persons of the Jewish faith.”

The FBI was watching the two men and soon contacted them with an undercover agent, who was posing as an arms dealer. They attempted to buy weapons, and they were arrested this week on charges of trying to possess guns after having been convicted of a felony, reported the Post.

Robert C. Doyle, 34, of Chester, Va., and Ronald B. Chaney III, 34, of Highland Springs, Va., attempted to buy automatic weapon, explosives and a pistol with a silencer from three undercover agents, said the FBI.

An associate, 30-year-old Charles D. Halderman, is being accused of plotting to rob a jeweler and use the money to help Doyle buy weapons for an “impending race war,” the FBI affidavit. He was charged with robbery conspiracy.

Neighbors of one of the suspects said they saw federal agents swarming around a Chesterfield home on Sunday. “I walked to the end of the cul-de-sac, and saw 15 police cars, marked and unmarked, and K-9’s searching,” said a woman, who wished to remain anonymous, reported WTVR. “There were people wearing camo and carrying big weapons.”

Authorities said they received the tip the men were plotting a wave of terror back in September.

The head of a Baptist church near where the men were arrested said the church increased security even before the men’s plot made the news.

“It’s a shame you can’t worship your god in peace,” Rodney Clarke told WTVR. “You try to have your focus on him, but you have to worry about what’s coming through the door.”