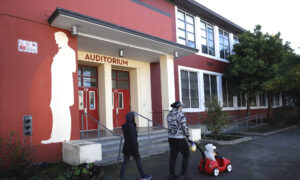 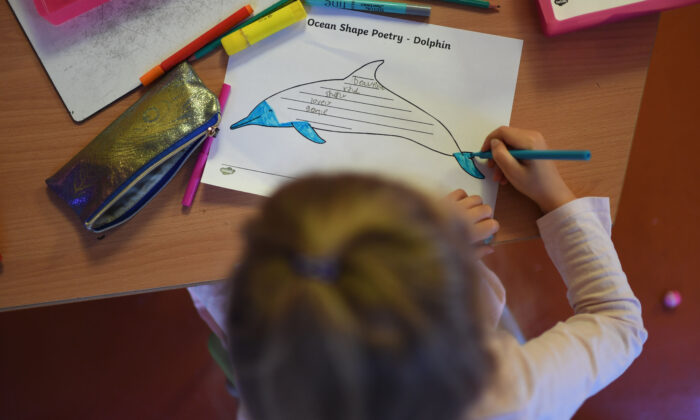 A Year 1 pupil colours a dolphin poetry worksheet while respecting social distancing rules in a classroom during a lesson at the College Francais Bilingue De Londres French-English bilingual school in north London on June 2, 2020. (Daniel Leal-Olivas/AFP via Getty Images)
UK

‘White Privilege’ Rhetoric May Have Contributed to ‘Systemic Neglect’ of White Pupils, MPs

The use of terms such as “white privilege” may be one of the reasons white working-class pupils are persistently falling behind in the UK, a Parliament committee has said.

The Education Select Committee said that it agreed with the Commission on Race and Ethnic Disparities that discourse around the term ‘White Privilege’ can be divisive, and that disadvantage should be discussed without pitting different groups against each other.

It also recommended schools to consider “whether the promotion of politically controversial terminology, including White Privilege, is consistent with their duties under the Equality Act 2010. ”

The committee warned of the risk of young people being inadvertently “inducted into political movements,” and asked the Department for Education (DfE) to issue clear guidance for schools and other Department-affiliated organisations receiving grants from the DfE on how to deliver teaching on these complex issues in a balanced, impartial, and age-appropriate way.

In a report (pdf) published on Tuesday, the committee said that its 14-month inquiry on left-behind white pupils from disadvantaged backgrounds had shown that “poor White pupils are far from ‘privileged’ in education.”

The report comes seven years after a previous House of Commons Education Select Committee found that “white working class underachievement in education is real and persistent” (pdf), and called on the Government to “take steps” to ensure that they fulfil their potential.

Looking at pupils in Britain who’re eligible for free school meals (FSM) in the 2018–2019 school year, the committee found white British children one of the worst-performing groups.

The proportion of FSM-eligible white British pupils starting higher education by the age of 19 in 2018/19 was once again the lowest of all groups except Irish Traveller and Gypsy/Roma pupils, at 16 percent.

The committee said that the reasons pupils are falling behind are multi-faced, including persistent and multigenerational disadvantage; place-based factors, including regional economics and underinvestment; family experience of education, a lack of social capital, disengagement from the curriculum; and a failure to address their low participation in higher education.

It made a number of recommendations to the government, such as highly tailored funding to address local needs, supporting parental engagement, boosting access to higher education, vocational training, apprenticeship, and attracting good teachers to challenging areas.

With regards to disadvantaged white pupils, the committee said that terms such as “White Privilege” may prevent them from getting the help they need, and schools need to find a better way to talk about racial disparities.

While recognising the importance of open debate on racism, the committee said it worries such phrases “may be alienating to disadvantaged white communities,” and “may have contributed towards a systemic neglect of white people facing hardship who also need specific support.”

Committee chair Robert Halfon said that white working-class pupils have been “let down and neglected by an education system that condemns them to falling behind their peers every step of the way” for decades, and he lambasted the government for failing to address the problem.

“White working-class pupils underperform significantly compared to other ethnic groups, but there has been muddled thinking from all governments and a lack of attention and care to help these disadvantaged white pupils in towns across our country,” he said in a statement.

“If the Government is serious about closing the overall attainment gap, then the problems faced by the biggest group of disadvantaged pupils can no longer be swept under the carpet. ”

Halfon said we shouldn’t “lazily” attribute the disparities only to poverty, when FSM-eligible ethnic minority pupils are doing much better than FSM-eligible white pupils.

“So far, the Department for Education has been reluctant to recognise the specific challenges faced by the white working class, let alone do anything to tackle this chronic social injustice. This must stop now.”

Halfon added that we “desperately need to move away from dealing with racial disparity by using divisive concepts like White Privilege that pits one group against another.”

“Privilege is the very opposite to what disadvantaged white children enjoy or benefit from in an education system which is now leaving far too many behind,” he said.

A DfE spokesperson said: “This Government is focused on levelling up opportunity so that no young person is left behind.

“That’s why we are providing the biggest uplift to school funding in a decade—£14 billion [($19.5 billion)] over three years—investing in early years education and targeting our ambitious recovery funding, worth £3 [($4.2 billion)] billion to date, to support disadvantaged pupils aged two to 19 with their attainment.”