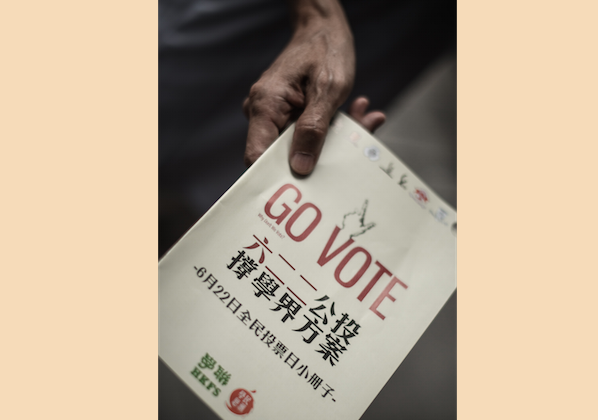 An activist distributes leaflets asking residents of Hong Kong to cast ballots for a June 22 referendum concerning universal suffrage, on June 12, 2014. A white paper on Hong Kong issued by the Chinese regime appears to have aroused people's interest in the referendum while simultaneously alienating the people of Taiwan. (Philippe Lopez/AFP/Getty Images)
Opinion

A white paper meant to chasten democratic longings in Hong Kong has alarmed Taiwan, pushing its people farther away from the People’s Republic of China.

On June 10, the Information Office for the State Council, whose Communist Party name is the Office of Foreign Propaganda, issued a 23,000-word white paper on the principle of “one nation, two systems” that governs China’s relations with Hong Kong.

According to the white paper, Hong Kong has only as much autonomy as the Chinese regime grants it. The understanding of “one nation, two systems” codified in Hong Kong’s Basic Law—its constitution—was suddenly deemed provisional.

This assertion of the Chinese regime’s authority was meant to be a shot across the bow of a burgeoning democracy movement in Hong Kong.

A week before the paper was issued, an estimated 180,000 attended a candlelight vigil in Hong Kong’s Victoria Park on June 4 to mark the 25th anniversary of the Tiananmen Square massacre.

On June 20, Hong Kongers began voting in an online referendum gauging the population’s support for universal suffrage, the principle of one person, one vote.

On July 1, a grand march calling for democracy is scheduled. After that, the Occupy Central movement plans to fill Hong Kong’s central business district with protesters demanding the right to elect those who govern them.

Wang Dan, exiled from China after the 1989 Tiananmen Square protests and currently teaching in Taiwan, said on his Facebook page that the tone used in the white paper was “tough and arrogant.” Wang said the white paper aims to deter people from joining the democracy movement and Occupy Central.

The attempt to quash Hong Kongers’ demand for democracy may have only inflamed it. On the first day, 400,000 voted in the referendum despite attempts to shut down the referendum website by hacking.

Meanwhile, Hong Kong was not the only territory with intense interest in the fate of “one country, two systems.”

The Chinese regime has been seeking on multiple fronts to seduce or coerce the island of Taiwan, which it regards as a breakaway province, into joining China.

Since Taiwan has a vigorous democracy, plans for reunification have often looked to Hong Kong as a model. Hong Kong might seem to offer an example of a population that retained basic rights while being governed by the People’s Republic of China.

Such hopes were junked after the white paper was issued. Voice of America reported it shocked Taiwan.

Dr. Huang Kuo-Chang, of the prestigious Academia Sinica in Taiwan, said that Taiwan could now never accept the principle of “one nation, two systems” as the basis for reunification with China.

According to Huang, the white paper on Hong Kong was a public violation of the Sino-British Joint Declaration, the 1984 treaty that set out the terms for Britain’s handover of its former colony to the People’s Republic of China.

On June 11, the day after the white paper was released, the Chinese regime further irritated public opinion in Taiwan and also put the most visible advocate of closer relations with China in a pickle. The spokeswoman for the Office of Foreign Propaganda said Taiwan’s future should be decided by China’s 1.3 billion people.

Wu pointed out that when Ma ran for president in 2008, his position was that Taiwan’s future should be decided by its 23 million people. Had he changed his views?

On the evening of June 11, Taiwan’s Presidential Office responded that President Ma had remained consistent. “In accordance with the Constitution of the Republic of China [Taiwan], Taiwan’s future should be decided by its 23 million people,” the Office said.

Dr. Tung Li-Wen, a professor at the Graduate School of Public Security at Central Police University, said that people in Taiwan should reconsider the relation they want with China after witnessing China’s deception, complete disregard of the laws and procedures, and tough attitude on Hong Kong issue.

Huang said the publication of the white paper indicated that the reunification of Taiwan would put Taiwan’s democracy in jeopardy.

The white paper is only the latest incident that has put the Taiwan people on guard.

Most recently, the Sunflower Student Movement formed to oppose the trade agreement that had been negotiated with China. The movement feared Taiwan becoming overly dependent on China economically. The people in Taiwan want their government to find its own way out in foreign trades instead of listening to Beijing in making financial decisions.

The battle waged by the Sunflower movement followed upon several years of anxiety about Taiwan’s media, as Taiwan’s people saw independent media companies come under the control of wealthy individuals friendly to Beijing.

The white paper following on these developments left the people of Taiwan with this conclusion: They don’t want to become another Hong Kong.