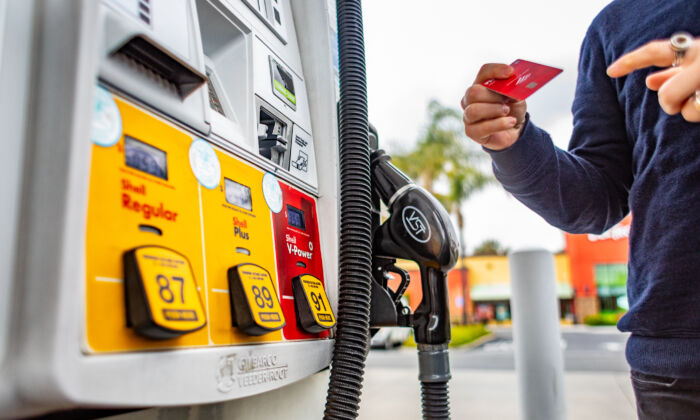 Masooma Haq
Masooma Haq began reporting for The Epoch Times from Pakistan in 2008. She currently covers a variety of topics including U.S. government, culture, and entertainment.
View profile
Follow
and Melina Wisecup

The White House’s recent plan to bring down gas prices, while bold, lacks substance, according to Don Whaley, president of Whaley Energy Consulting, who said releasing oil from the national reserves and invoking the Defense Production Act (DPA) are largely symbolic actions.

“So, this announcement, while it’s a bold step … I’m not sure how much substance there really is behind it. And more importantly, this is not like during World War II, when we turned all our commercial production into military production,” Whaley told NTD’s “Capitol Report” during a recent interview.

Biden announced on March 31 that he would use the DPA to encourage a domestic industrial base that would reduce “unreliable foreign sources” for minerals, currently imported from China, that power electric cars. The White House specifically noted minerals such as nickel, lithium, cobalt, manganese, and graphite in the new notice.

Whaley has worked for more than 40 years in the natural gas, electricity, and renewables industries in the United States and Canada. He has facilitated the startup of a number of small REPs (retail electric providers).

He said it will take time to see if anything comes of the DPA because the United States isn’t the leading producer of things like “solar panels, lithium batteries, etc.”

At the White House on March 31, Biden said his administration will “need to embrace all the tools and technologies that can help us free us from our dependence on fossil fuels.”

Whaley, who is a proponent of renewables and transitioning away from fossil fuels, said doing so will take a long-term approach, and pushing that too soon, is the reason we are seeing a lack of oil production and high fuel prices.

“I think the reason we’re seeing prices at the pump the way we are right now, the reason we’re seeing energy prices [rise] for electricity at home, is there has been a rush to make that transition without a proper trajectory to achieve it without shocking the American economy, without shocking the American homeowner,” Whaley said.

Meanwhile, Biden criticized oil companies for putting profits before consumers, citing they made billions in profits and should share those profits by way of reducing gas prices.

“No American company should take advantage of a pandemic or Vladimir Putin’s actions to enrich themselves at the expense of American families.” Biden further blamed the companies, saying there are 9,000 federal drilling leases companies are not utilizing.

“They have everything they need. Nothing is standing in their way,” Biden said during his announcement. He also announced a release of 1 million barrels of oil per day from the federal oil reserve for six months to ease high gas prices.

“This is more symbolic than functional,” Whaley said. “One million barrels dumped into a 97-million-barrel market is not going to move the needle that far.” He noted that low production is due to a lack of investment in drilling, resulting from the Biden administration’s attack on the industry.

“I think we need to de-risk the oil and gas industry. This administration, from day one, has waged a subtle war on oil and gas exploration in the U.S. President Biden’s nominee for comptroller of the currency went on record saying that it was their goal to bankrupt oil and gas explorers,” he said.

Whaley was referring to comments a former Biden nominee for comptroller of the currency, Saule Omarova, made during a virtual Jain Family Institute’s Social Wealth Seminar in February 2022.

“We want them to go bankrupt if we want to tackle climate change,” she said about coal, gas, and oil companies.

“And whenever prices run up, we see upticks in exploration, upticks in production,” Whaley said. “It’s not safe to do that right now, because you don’t know what sort of regulatory barricade is coming around the corner. So why would you invest those dollars in an unstable regulatory environment that’s been created by this administration?”