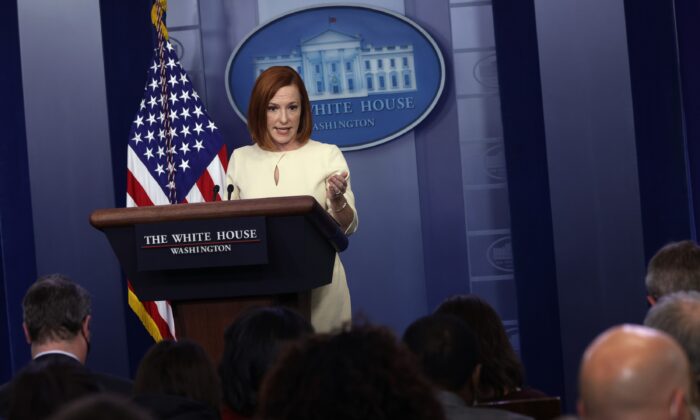 Biden, a presidential candidate at the time, last year released a video on Twitter showing Rittenhouse and others. Biden alleged those shown were white supremacists.

He also claimed during a cable TV appearance that Rittenhouse was “part of a militia.”

Neither claim has evidentiary backing.

Rittenhouse said this week that the white supremacist one was an example of “actual malice” and suggested he may sue Biden for defamation.

Pressed on the claims, Psaki told reporters that Biden “believes in condemning hatred, division, and violence” and “That’s exactly what was done in that video,” which she referred to as a “campaign video.”

A reporter noted that neither of Biden’s claims were proven during Rittenhouse’s trial, which ended with his acquittal. He also quoted Rittenhouse’s “actual malice” charge.

“The president spoke to the verdict last week. He has obviously condemned the hatred and division and violence we’ve seen around the country by groups like the Proud Boys and groups that that individual has posed in photos with. But beyond that, I’ll leave it to his comments around the verdict,” Psaki added.

Biden said in a statement he was angered by the acquittal but that people should respect the jury’s decision. He told reporters that he did not watch the trial.

Rittenhouse, who has not yet responded to Psaki’s remarks, told Fox News that he has lawyers exploring the derogatory remarks made against him last year in the wake of the shootings in Kenosha, Wisconsin.

Several prominent lawyers, including Todd McMurty, who represented Nick Sandmann, have said the teenager could have a case against people who made evidence-free claims.

Sandmann won settlements from multiple news outlets that had framed Sandmann as the aggressor in an incident in Washington when video footage showed that wasn’t the case.

Rittenhouse posed for pictures with Proud Boys members at a bar in January.

Rittenhouse said on “NewsNation” that he didn’t know the men were part of the group, which has participated in clashes with the far-left Antifa network and other rival organizations over the years, and had multiple members take place in the Jan. 6 breach of the U.S. Capitol.

“I found out they were Proud Boys when I saw the headlines,” Rittenhouse said. “I thought they were just a bunch of, like, construction dudes based on how they looked.”

The teenager said the meeting was arranged by a former lawyer.

NewsNation’s Ashleigh Banfield also asked why Rittenhouse made the “OK” symbol with his hand, claiming it is a white supremacist symbol. Rittenhouse said he wasn’t aware of that.