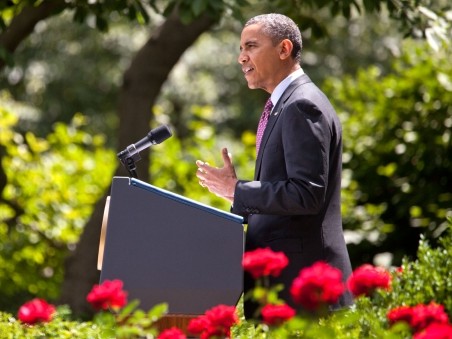 President Obama delivers remarks on his new immigration policy at the Rose Garden on Friday, June 15. (www.whitehouse.gov)
US

White House Will Stop Deportation of Some Illegal Immigrants

Last Friday, the Obama administration announced it would stop prosecuting and deporting certain undocumented immigrants—the so-called “dreamers”—who were brought to the country illegally by their parents as children, but who have gone on to become otherwise productive and law-abiding Americans.

“It is the right thing to do,” said President Obama during a speech at White House Rose Garden, as he outlined the new immigration policy, which will be implemented through executive order.

In order to be eligible, immigrants must possess documentation proving they arrived in the United States before the age of 16, and that they have lived in the country continuously for at least five years. They must be currently attending school, have obtained a high school diploma or general education degree, or have been honorably discharged from the U.S. military.

In addition, they must be no older than 30 years of age, not pose a national security risk, nor have been convicted of a felony, a serious misdemeanor, or multiple misdemeanors.

These immigrants will be eligible to receive “deferred action” from the Department of Homeland Security, which means they will earn a two-year reprieve from being prosecuted or deported due to their immigration status, and will have the opportunity to apply for a work permit. However, decisions will be made on a case-by-case basis by the Department of Homeland Security, and not all immigrants who receive deferred action will gain the right to work legally.

David Plouffe, Obama’s senior advisor, appeared on the Sunday morning talk show circuit to defend the president’s new policy, insisting that the move was not politically motivated, but was made due to practical concerns.

“It wasn’t about politics. First of all, this was a decision made by the Homeland Security Department, allowed them the discretion to focus our enforcement on criminals, people who pose danger to communities. That’s really where the law enforcement focus should be,” said Plouffe to MSNBC’s David Gregory on “Meet the Press.”

Despite the White House’s insistence that the implementation of this policy is “the right thing to do,” the move is seen by many to be a political power grab meant to excite a Latino voter base, which has thus far been relatively disappointed in the president on immigration issues, including the administration’s aggressive deportation policies and inability to implement a comprehensive immigration reform solution. On the other hand, the move could also alienate potential independent and swing voters in November.

Republican legislators have criticized Obama’s new policy and characterized it as a form of “backdoor amnesty.” GOP president candidate Mitt Romney, meanwhile, did not criticize the policy outright, but said that the president’s policy was simply a “stop-gap measure,” and that under a Romney administration there would be a more permanent legislative fix to the illegal immigration problem.

“With regard to these kids who were brought in by their parents through no fault of their own, there needs to be a long-term solution so they know what their status is,” said Romney to “Face the Nation” host Bob Schieffer on Sunday while on the campaign trail in Pennsylvania. “This is something Congress has been working on, and I thought we were about to see some proposals brought forward by Sen. Marco Rubio and by Democrat senators, but the president jumped in and said I’m going to take this action—he called it a stop-gap measure.”