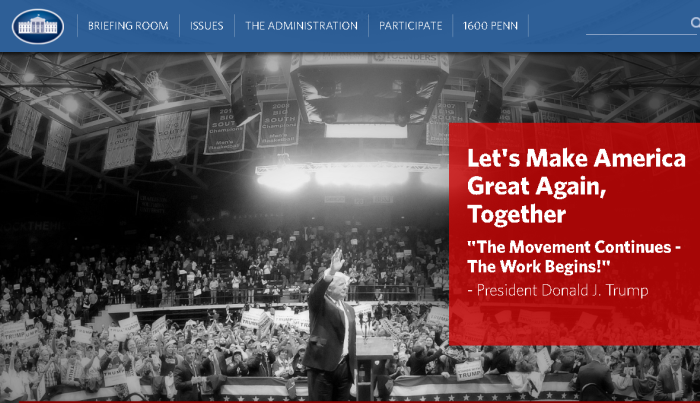 The White House website, after President Donald Trump was inaugurated, no longer includes an option for a translation into Spanish or other languages.

The Spanish translation option was available on the White House website under President Obama’s administration.

However, White House spokesman Sean Spicer on Monday suggested a translation option might return, but he didn’t indicate when it would be implemented.

“We are continuing to build out the website, both in the issue areas and then that area,” Spicer told reporters in his first daily briefing as press secretary, according to a live feed. “But we’ve got the IT folks working overtime right now to continue to get all of that up to speed. Trust me, it’s just going to take a little bit more time, but we’re working piece by piece to get that done.”

During the campaign, after Florida Gov. Jeb Bush spoke Spanish during a Republican primary debate, Trump told him that “this is a country where we speak English” to some adulation from the crowd. “We have to have assimilation to have a country,” he added.

On Friday, right after Inauguration Day, sections on White House website were eliminated, including references to climate change and a page for LGBT issues.

In the new “issues” section, it included six statements:

According to the CIA factbook,  around 13 percent of the population speaks Spanish, while around 80 percent speak English. However, the United States doesn’t have an official national language.