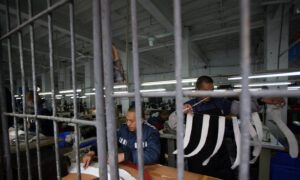 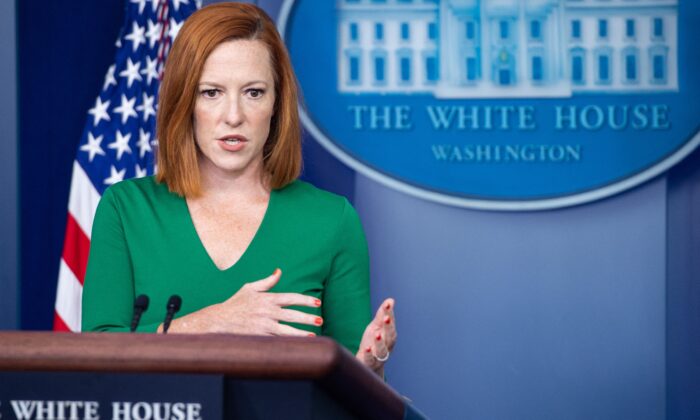 White House press secretary Jen Psaki speaks during the daily press briefing in the Brady Briefing Room of the White House on Aug. 6, 2021. (SAUL LOEB/AFP via Getty Images)
US News

White House: US to Continue Its Hard Line on China’s Unfair Trade Practices

WASHINGTON—The White House has signaled that it intends to maintain tariffs on Chinese goods, despite mounting pressure from American businesses.

“The president is always going to use every tool in his toolbox, including tariffs, to fight against unfair trade practices that hurt American workers, businesses, and farmers,” White House press secretary Jen Psaki said during a press briefing on Aug. 6.

Her response came after the nation’s most influential business groups sent a letter to the administration demanding a reset in China trade relations.

Nearly three dozen trade groups representing retailers, chipmakers, farmers, and others called on the administration to restart trade talks with Beijing and remove tariffs on Chinese goods introduced by the previous administration, The Wall Street Journal reported on Aug. 5.

In a letter addressed to Treasury Secretary Janet Yellen and U.S. Trade Representative Katherine Tai, the business groups said Beijing had met “important benchmarks and commitments” in the phase one trade agreement signed in early 2020.

“A worker-centered trade agenda should account for the costs that U.S. and Chinese tariffs impose on Americans here and at home, and remove tariffs that harm U.S. interests,” the letter stated.

The business groups include the U.S. Chamber of Commerce, the Business Roundtable, the National Retail Federation, the American Farm Bureau Federation, and the Semiconductor Industry Association.

President Joe Biden has been “very clear that he thinks that a go-it-alone strategy is a losing one. We’re stronger when we work with our allies and unite the world’s GDP,” Psaki said.

The Biden administration has maintained tariffs on nearly $360 billion worth of Chinese goods that were enacted by former President Donald Trump. But the administration did launch a comprehensive review of the phase one agreement, including the tariffs.

Psaki said there’s still no timeline for the conclusion of the review process.

It’s unclear whether the Biden administration would lift the existing tariffs following its review.

The phase one trade deal signed under the Trump administration requires Beijing to buy $200 billion worth of additional U.S. goods and services during the two-year period of 2020 and 2021. Analysis of Chinese trade data by the Peterson Institute for International Economics shows that China has met about 58 percent of its purchase target in 2020 and 69 percent through June 2021.

In an interview with The New York Times in July, Yellen questioned the merits of tariffs imposed on Chinese goods, becoming the first Biden administration official to criticize them publicly.

“My own personal view is that tariffs were not put in place on China in a way that was very thoughtful with respect to where there are problems and what is the U.S. interest,” she said.

Yellen called tariffs “taxes on consumers” and said, “In some cases, it seems to me what we did hurt American consumers, and the type of deal that the prior administration negotiated really didn’t address in many ways the fundamental problems we have with China.”

Companies and trade associations have been pushing hard against the tariffs on Chinese goods. More than 6,000 U.S. companies, including Ford, Tesla, and Home Depot, challenged the tariffs in court, claiming that they are not only bad policy but also “illegal.”

In a court filing, the Biden administration asked the court to dismiss the complaints against the tariffs, saying that they were lawfully imposed.

Trade experts say that the Biden administration won’t lift the tariffs without securing concessions from the regime in Beijing. They also express skepticism about whether the Chinese regime can truly commit to structural reforms to address long-term issues such as forced technology transfer and cyber theft.

Since joining the World Trade Organization in 2001, China hasn’t kept its promise to pursue market-oriented policies, according to a new report by the Washington-based Information Technology and Innovation Foundation. The ruling communist regime has repeatedly led China to violate global trading rules, which saw the Trump administration in 2017 launch a Special 301 investigation into China’s trade and economic practices.

The investigation resulted in the imposition of tariffs on nearly $360 billion worth of Chinese goods. That’s about 66 percent of Chinese exports to the United States, at an average tariff rate of 19 percent.