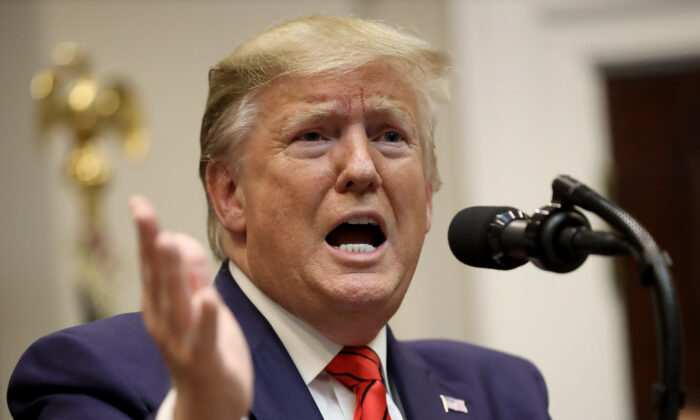 President Donald Trump responds to a question from a reporter at an event at the White House in Washington on Oct. 9, 2019. (Win McNamee/Getty Images)
Politics

The White House on Oct. 14 said that President Donald Trump “strongly condemns” a violent meme that played at a conference over the weekend.

“The @POTUS @realDonaldTrump has not yet seen the video, he will see it shortly, but based upon everything he has heard, he strongly condemns this video,” White House press secretary Stephanie Grisham said in a statement.

The video took footage from “Kingsman” and superimposed Trump’s face in place of one of the characters, who carried out a shooting in a church. Some of the victim’s faces were replaced by logos for media companies.

The meme prompted an outcry from the companies and a range of reporters.

Re: the video played over the weekend: The @POTUS @realDonaldTrump has not yet seen the video, he will see it shortly, but based upon everything he has heard, he strongly condemns this video.

Trump was not involved in the making of the video and the American Priority Conference, where it played, said that the footage was unauthorized and “shown in a side room.”

“This video was not approved, seen, or sanctioned by the #AMPFest19 organizers,” Alex Phillips, the conference organizer, said in a statement. He said New York Times reporters brought the footage to their attention.

“We find it shocking that the New York Times would not report on any of the sanctioned events in the article. Including our panel conversation LITERALLY condemning political violence while claiming to be upset over a meme that was not sanctioned, shown on stage, or approved,” Phillips said. “#AMPFest19 always has and always will condemn political violence.”

American Priority was founded in 2018. “Our Mission is to develop and hold educational events that support the First Amendment, highlight American culture, and values as well as solutions to issues we face as a nation. We support the America First but not alone agenda as well as open dialogue freedom of speech and free association,” the group said on its website.

The White House Correspondents’ Association said that it was “horrified” by the video.

“The WHCA is horrified by a video reportedly shown over the weekend at a political conference organized by the President’s supporters at the Trump National Doral in Miami. All Americans should condemn this depiction of violence directed toward journalists and the President’s political opponents,” Jonathan Karl, president of the association and an ABC reporter, said in a statement.

Karl attempted to blame Trump, saying “We have previously told the President his rhetoric could incite violence.” Karl called on Trump to denounce the video.

“The video reportedly played this weekend at a conference organized by the President’s supporters at Trump National Doral is vile and dangerous,” Karl added in a personal statement.