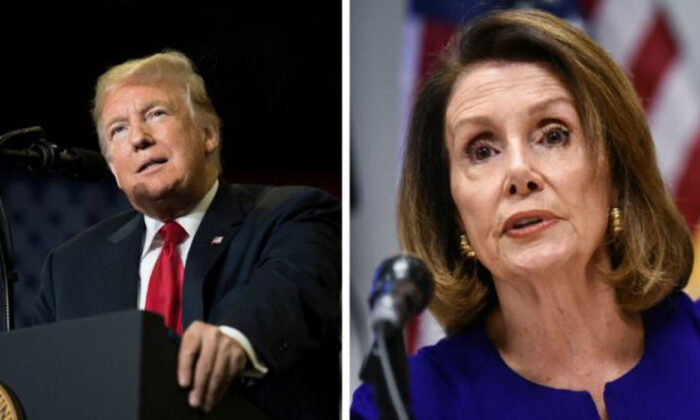 Press secretary Stephanie Grisham wrote Thursday that Pelosi and Democrats should be “ashamed” while Trump “has done nothing but lead our country—resulting in a booming economy, more jobs & a stronger military, to name just a few of his major accomplishments. We look forward to a fair trial in the Senate.”

And meanwhile, Trump campaign manager Brad Parscale noted the unusual timing of the push for impeachment.

“We are less than a year away from Election Day 2020 and Democrats can’t possibly explain to the American people why they want to take the decision of who should be president out of the hands of voters. But impeaching the President has always been their goal, so they should just get on with it so we can have a fair trial in the Senate and expose The Swamp for what it is. Speaker Pelosi, Chairman Schiff, and Hunter Biden should testify, and then we can get back to the business of our country,” he said in a statement on Thursday.

Pelosi, in a 9 a.m. press conference, said that her caucus has been left with “no choice but to act” to move forward on articles of impeachment.

Her announcement comes after four law professors testified during a heated Judiciary Committee hearing on Wednesday.

“Today I am asking our chairman to proceed with articles of impeachment,” Pelosi stated during her address in reference to House Judiciary Committee Chairman Jerrold Nadler (D-N.Y.). “The facts are uncontested. The president abused his power for his own personal political benefit at the expense of our national security by withholding military aid and [a] crucial Oval Office meeting in exchange for an announcement of an investigation into his political rival,” Pelosi said.

“The president’s actions have seriously violated the Constitution,” she said. “His wrongdoing strikes at the very heart of our Constitution.”

Democrats have alleged that Trump misused his power by asking Ukrainian President Volodymyr Zelensky to investigate former Vice President Joe Biden and his son, Hunter Biden, who had a lucrative position on the board of a Ukrainian energy firm long accused of corruption. Trump and Zelensky have both denied the Democrats’ claims, with Zelenksy doing so for a second time over the weekend.

On Wednesday, three Democratic-selected law professors argued that Trump committed an impeachable offense while the lone Republican-selected professor dissented and accused Democrats in the House of abusing their power, instead of Trump.

“If we cannot impeach a president who abuses his office for personal advantage, we no longer live in a democracy—we live in a monarchy, or we live under a dictatorship,” Harvard Law professor Noah Feldman, one of the Democrat-selected professors, told the committee.

But Jonathan Turley of George Washington University said that Democrats, in this case, should not rush to impeach the president as they had scant evidence to do so.

Turley also accused House Democrats of “precisely” doing what they have accused Trump of doing: abusing their oaths of office.

“It’s your abuse of power,” he warned the House if they moved to impeach the president. He said he has seen no evidence that showed Trump engaged in quid pro quo, as Democrats have asserted, in his dealings with Ukraine.