White House to Present Guidelines on Reopening the Country on Thursday 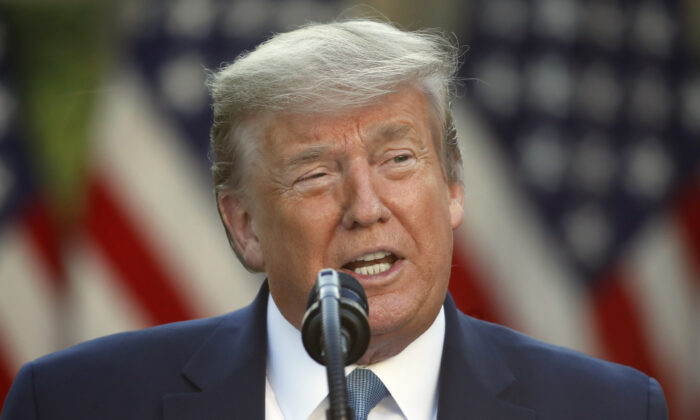 President Donald Trump speaks about the coronavirus in the Rose Garden of the White House in Washington on April 15, 2020. (Alex Brandon/AP Photo)
By Allen Zhong

President Donald Trump said that the White House is planning to announce guidelines to open the country on Thursday afternoon.

He mentioned that new cases of CCP (Chinese Communist Party) virus, commonly known as novel coronavirus, are starting to decline throughout the New York metropolitan area, New Orleans, and in other areas. New cases in Detroit and Denver areas have flattened, he added.

“The data suggests that nationwide we have passed the peak on new cases,” he said. “These encouraging developments have put us in a strong position to finalize guidelines for states on reopening the country, which we will be announcing tomorrow.”

It will be announced at a news conference on Thursday afternoon, he said.

Trump also mentioned that preliminary data suggested people did have an immunological response to the CCP virus and had developed some protection during the outbreak.

Abbott Laboratories has developed an antibody test that will determine if someone has been previously infected with the CCP virus and potentially development immunity, he announced.

The CCP virus, which originated in Wuhan, China, has caused at least 133,572 deaths globally and infected over 2 million people as of Wednesday afternoon, according to data collected by Johns Hopkins University. The numbers are considered to be inaccurate because of a lag in data collection by governments as well as significant underreporting of known cases and deaths by mainland China.

Dr. Deborah Birx, the White House pandemic response coordinator, reaffirmed that the cases are declining in some areas.

However, Birx warned again that the CCP virus is highly contagious, and it can be spread without symptoms. She urged people to adhere to the social distancing guidelines and for those who feel sick to stay home.

“Social gathering, coming together, is always a chance that an asymptomatic person can spread the virus unknowingly,” she said. “Don’t have that dinner party for 20 yet,” she explained.

Different regions in the U.S. have a different situation, and the White House guidelines will be of a generalized nature, Birx said.

“The governors and each of these mayors will have to make decisions,” she said. “They can do what’s best for their communities. They are at the front line.”