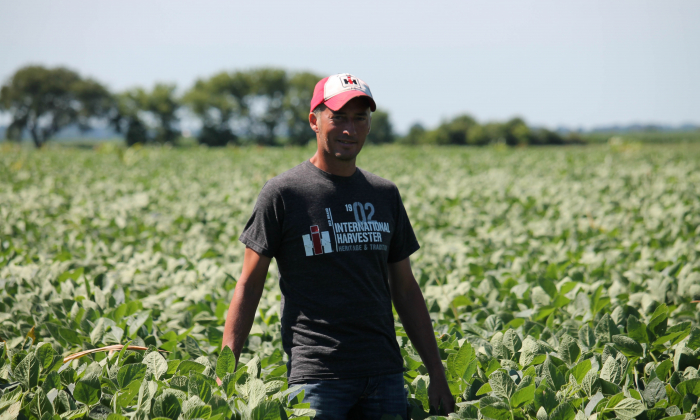 The administration of President Donald Trump will provide up to $12 billion in aid to farmers impacted by retaliatory tariffs imposed by America’s trading partners, according to Sonny Perdue, the secretary of the Department of Agriculture.

The size of the aid package is in line with the estimated $11 billion cost of the tariffs to American farmers. In a briefing call on July 24, Perdue and top department officials explained that the financial boost is designed to provide temporary relief to farmers as the United States negotiates long-term trade deals.

“The president promised to have the back of every American farmer and rancher, and he knows the importance of keeping our rural economy strong,” Perdue said. “Unfortunately, America’s hard-working agricultural producers have been treated unfairly by China’s illegal trading practices and have taken a disproportionate hit when it comes [to] illegal retaliatory tariffs.”

Trump approved tariffs on steel and aluminum and imposed a 25 percent levy on $34 billion worth of Chinese goods. The affected nations imposed counter-tariffs on American products, including soybeans, pork, dairy, fruits, nuts, and other specialty crops.

Farmers and producers should be able to begin signing up for the aid beginning in September. The funds will be split between three programs.

The Market Facilitation program will distribute the bulk of the money to farmers and ranchers producing commodities directly impacted by the tariffs, including soybeans, sorghum, corn, wheat, cotton, and pork. The Department of Agriculture will determine the payment to each farmer based on the size of a crop multiplied by a specific subsidy rate.

Perdue noted that the move is a signal to China that the United States will not cave to retaliatory tariffs.

“It is clear to everyone that President Trump has gotten China’s attention like never before,” Perdue said. “At every step along the way during these recent trade disruptions, it is important to highlight that the correct action from other nations would be to stop their bad behavior—not to retaliate with unjustified tariffs.”

The president has said that he favors free trade but uses tariffs as leverage.

“Tariffs are the greatest!” Trump wrote on Twitter on July 24. “Either a country which has treated the United States unfairly on Trade negotiates a fair deal, or it gets hit with Tariffs. It’s as simple as that—and everybody’s talking! Remember, we are the ‘piggy bank’ that’s being robbed. All will be Great!”

The White House argues that the short-term pain from retaliatory tariffs is negligible compared to the benefits the country stands to reap from fair trade deals and lowered trade barriers.

In a speech on July 24, Trump told supporters that his predecessors are to blame for the existing deals, which he called a “disaster. ”

Referring to America’s trade partners, Trump said: “They’d do whatever they wanted, and we’d just put up with it. Not any longer folks. Not any longer.

“Watch, we’re opening up markets. You watch what’s going to happen. Just be a little patient.”

Though details are not yet final, the aid package is not expected to breach the $19.1 billion limit the World Trade Organization allows for internal subsidies, according to Brad Karmen, the USDA’s assistant deputy administrator for farm programs.

The USDA was expected to announce farm aid on Labor Day. Officials explained that Labor Day remains the effective date for when the programs will begin operating.

Perdue came up with the plan at the behest of Trump, who asked the secretary to come up with ways to mitigate the damage from retaliatory tariffs.

Tariffs on U.S. goods have impacted all sectors of the economy, according to the USDA’s trade counsel to the secretary, Jason Hafemeister. The aid package is likewise expected to have a positive ripple effect beyond the farmers, according to Greg Ibach, the USDA’s undersecretary for marketing and regulatory programs.

The $12 billion budget is not subject to congressional approval since the three programs are already authorized to provide aid. The USDA will instead draw on funds from the Commodity Credit Corporation. The government-owned company has the authority to borrow up to $30 billion per year from the Department of the Treasury and its net losses are covered through the budget appropriations process.

In addition to tariffs, evidence has surfaced that American commodity shipments are being deliberately slowed down through “unusually strict or cumbersome entry procedures,” according to a press release from the USDA. The slow-down affects the marketability of perishable products.