White House to Americans: Brace for the Worst, but Know Mitigation Is Working 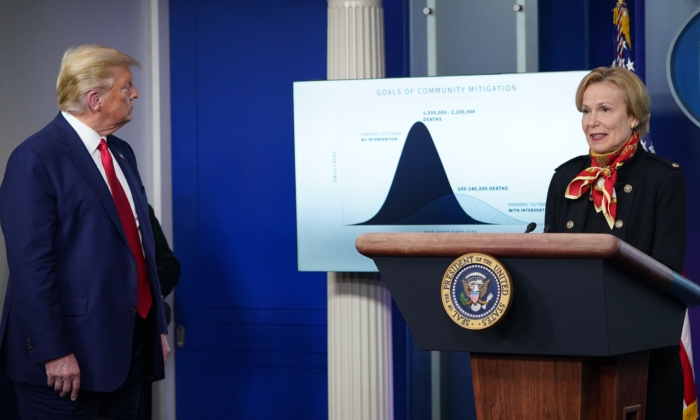 President Donald Trump listens to Response coordinator for White House Coronavirus Task Force Deborah Birx speak during the daily briefing on the CCP virus in the Brady Briefing Room at the White House on March 31, 2020. (Mandel Ngan/AFP via Getty Images)
By Ivan Pentchoukov

As the projected deadliest stretch of the CCP virus outbreak in the United States nears, the White House wants Americans to brace for weeks of grim news ahead, to know that mitigation efforts are working, and to unite as a nation to follow the government’s social distancing guidelines for 30 more days.

Based on the best-case projection with full mitigation measures in place, as many as 240,000 people may die from the CCP (Chinese Communist Party) virus, commonly known as novel coronavirus, before the outbreak is extinguished, according to models used by the White House.

The pandemic is expected to peak by April 15, with more than 2,200 deaths in a single day, before beginning a gradual decline that may prove even more deadly over time, officials say.

“I want every American to be prepared for the hard days that lie ahead,” President Donald Trump said at the White House on March 31. “We’re going to go through a very tough two weeks.

“Our strength will be tested and our endurance will be tried, but America will answer with love and courage and ironclad resolve,” he said. “This is the time for all Americans to come together and do our part.”

Trump and the members of the White House Coronavirus Task Force highlighted that while the statistics about the pandemic’s spread in the United States will continue to look increasingly bleak in the next two to three weeks, there’s evidence that social distancing measures are helping to stem the outbreak.

As a result, the White House is urging Americans to do their part in helping to defeat the disease and ease the strain on the health care system by continuing to follow its social distancing guidelines, as well as local measures in place in communities at least until April 30.

“We got to brace ourselves in the next several days to a week or so,” said Dr. Anthony Fauci, a member of the CCP virus task force. “We’re going to continue to see things go up. We cannot be discouraged by that because the mitigation is actually working and will work.”

Dr. Deborah Birx, another member of the task force, said, “We’re very dependent on each person in the United States doing the same thing: following the presidential guidelines to a tee. I know it’s a lot to ask because you’ve done it for 15 days.”

Despite the gloomy prognosis, there are glimmers of hope from statistics at home and abroad. In California and Washington state, social distancing appears to have helped suppress a rapid rise in new cases. In Italy, new cases are finally declining on a daily basis after nearly four weeks of full mitigation.

“So this is what gives us a lot of hope,” Birx said. “They’re entering their fourth week of full mitigation and showing what is possible when we work together as a community, as a country, to change the course of this pandemic together.”

Models used by the White House already show that actions taken since the beginning of the outbreak may have reduced the total death toll in the United States by several orders of magnitude. In a no-intervention scenario, as many as 2.2 million people may have died from the CCP virus, according to one model.

Trump and his team have used daily briefings to place the White House’s all-of-government approach on full display for Americans. Vice President Mike Pence regularly rattles off a list of supplies, equipment, and personnel delivered around the nation.

“To the American people though, we just want to assure you that we’re going to continue to work our hearts out to make sure our healthcare providers have everything they need, that anyone struggling with coronavirus has the support and health care they need,” Pence said at the briefing on March 31.

While all of the officials struck a markedly somber tone on March 31, each emphasized that Americans can ride out the storm by doing their part and following social distancing guidelines.

“If you look at our history, we’ve been through some terrible ordeals,” Fauci said. “This is tough. People are suffering. People are dying. It’s inconvenient from a societal standpoint, from an economic standpoint, to go through this, but this is going to be the answer to our problems.”

“So let’s all pull together and make sure, as we look forward to the next 30 days, we do it with all the intensity and force that we can.”