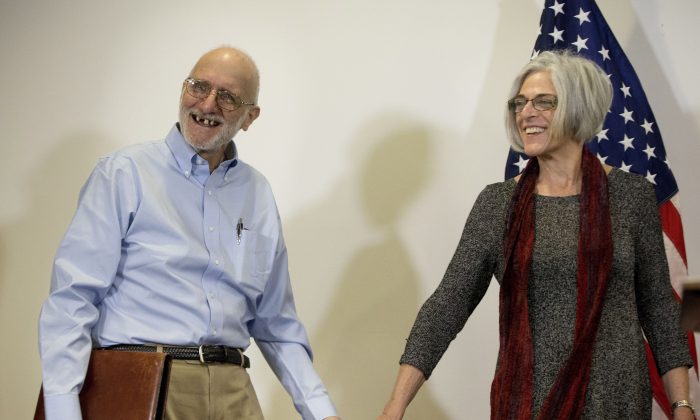 Alan Gross, released after five years in a Cuban prison, smiles as he and his wife Judy arrive for a news conference in Washington on Dec. 17, 2014. The White House is thankful to Canada for hosting secret meetings that led to the re-establishment of relations between the U.S. and Cuba. (AP Photo/Pablo Martinez Monsivais)
Canada

White House Thanks Canada for Hosting Key Meetings Between US, Cuba

OTTAWA—The White House is extending its thanks to Canada for hosting the meetings that led to the United States and Cuba agreeing to re-establish diplomatic relations and open economic and travel ties.

Senior Obama administration officials say Canada was “indispensable” in hosting the majority of the secret talks, which took place for more than a year.

They say the first face-to-face talks with the Cubans took place in Canada in June of last year, with several other discussions taking place since then. Canada did not take part in the talks, however.

Prime Minister Stephen Harper issued a statement congratulating the two countries on reaching their agreement, which marks a historic shift in U.S. policy after a half-century of enmity towards Cuba dating back to the Cold War.

The announcement coincided with the release of American prisoner Alan Gross, as well as a swap for a U.S. intelligence asset held in Cuba and the freeing of three Cubans jailed in the U.S.