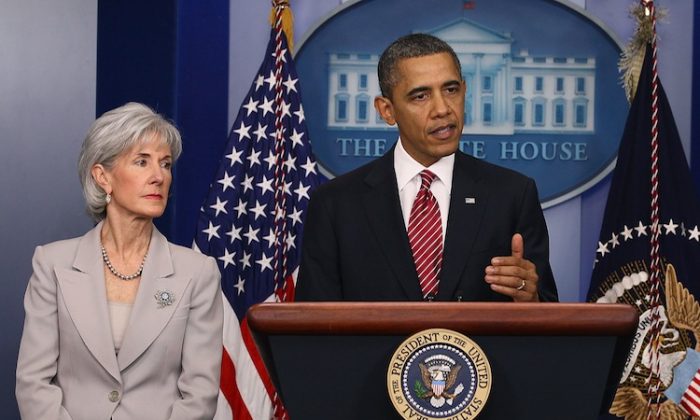 President Barack Obama is joined by Health and Human Services Secretary Kathleen Sebelius while making a statement in the briefing room at the White House on Feb. 10. Obama announced a reversal of his administration's health care rule requiring religious employers to provide women free access to contraception. (Mark Wilson/Getty Images)
US

Amid the growing political crisis over the controversial Affordable Care Act rule that requires employers to provide health insurance covering women’s contraception, President Barack Obama compromised on his position on Friday, after Catholic and religious groups voiced vehement opposition to the mandate.

Under the original rule, which is backed by liberal and women’s rights groups, all employers would have been required to provide insurance plans that covered preventative care, which includes women’s contraception, at no extra cost.

Churches and other religious institutions would have been exempt from the mandate. However, the rule still would have applied to many church-affiliated employers, such as schools, universities, and hospitals. Opponents of the original rule argued that the mandate would compel those institutions to violate their own religious beliefs.

In a press briefing on Friday, Obama announced his intention to soften his stance on the rule, wanting to find a middle-of-the road solution that would satisfy both women’s rights groups and critics.

Under the revised plan, women who work for religious institutions would still have access to contraceptive coverage, but would obtain it directly from insurers, rather than through their employers.

“Under the rule, women will still have access to free preventive care,” said Obama in the White House Press Briefing Room. “That includes contraceptive services no matter where they work. So that core principle remains. But if a woman’s employer is a charity or hospital that has a religious objection to providing contraceptive services in the health plan, the insurance company—not the hospital, not the charity—will be required to reach out and offer the woman contraceptive care free of charge, without co-pays and without hassles.

“The results will be that religious organizations won’t have to pay for these services, and no religious institution will have to provide these services directly … but women who work at these institutions will have access to free contraceptive services just like other women, and they’ll no longer have to pay hundreds of dollars a year that could go toward paying the rent or buying groceries.”

The president’s announcement elicited mixed reactions from critics of the original rule, ranging from dissatisfaction to cautious optimism.

Timothy Dolan, president of the U.S. Conference of Catholic Bishops (USCCB), voiced a lukewarm reception to the shift in Obama’s stance, calling it a “step in the right direction.”

“We hope to work with the administration to guarantee that Americans’ consciences and our religious freedom are not harmed by these regulations,” said Dolan.

“The Catholic Health Association is very pleased with the White House announcement that a resolution has been reached that protects the religious liberty and conscience rights of Catholic institutions,” said Keehan. “The framework developed has responded to the issues we identified that needed to be fixed. We are pleased and grateful that the religious liberty and conscience protection needs of so many ministries that serve our country were appreciated enough that an early resolution of this issue was accomplished.”

Responses from other religious leaders, however, were less friendly.

“A resolution to this issue cannot only cover religious employers. Religious freedom, which includes freedom of conscience, does not belong only to religious entities but to every American. There are many non-religious reasons to object to the administration’s policy,” said Rev. Frank Pavone, president of Priests for Life, an anti-abortion group.

Moving forward, the Obama administration has announced its intention to work with religious organizations in order to formulate a final solution that is palatable for both women’s rights groups, who are fighting for access to low-cost contraception, and religiously affiliated employers, who object to providing insurance plans that cover contraception against their beliefs.