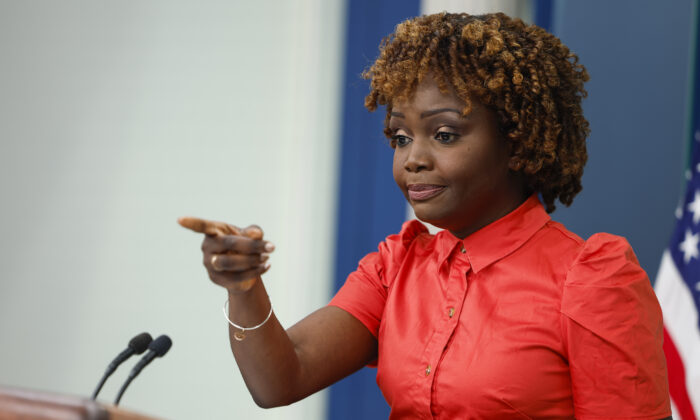 “What we’re seeing, this new migration challenge, is driven by people who are fleeing falling regimes and economic collapse in Venezuela, Nicaragua, and also Cuba,” White House press secretary Karine Jean-Pierre said during a press briefing in Washington.

Jean-Pierre appeared to be the first White House official to react after the illegal immigrant arrests at the border in fiscal year 2022 shattered the 2021 number, which had set a new record.

For the first time in U.S. history, more than 2 million arrests were recorded in a fiscal year, after a record-high 227,547 apprehensions in September.

Statistics from Customs and Border Protection show that the number of Venezuelan, Nicaraguan, and Cuban nationals have spiked in recent months, coming in 245 percent higher in September versus the same month in 2021.

The Biden administration is trying to pivot to deal with the new reality, Jean-Pierre said.

“We are hard at work at driving towards a regional solution to manage this new challenge,” she said, pointing to joint actions undertaken by the United and Mexico this month.

Effective Oct. 12, any Venezuelans who enter the United States between ports of entry and are captured are returned to Mexico. At the same time, a new process introduced by the administration enables up to 24,000 Venezuelans who meet certain conditions to enter the country.

“These actions make clear that there is a lawful and orderly way for Venezuelans to enter the United States, and lawful entry is the only way,” Homeland Security Secretary Alejandro Mayorkas, a Biden appointee, said in an earlier statement. “Those who attempt to cross the southern border of the United States illegally will be returned to Mexico and will be ineligible for this process in the future.”

Eligibility hinges on having a “supporter” present in the United States who can provide financial backing and other support, meeting vaccination requirements, and passing screening. A removal order from the previous five years, crossing between ports of entry since Oct. 12, having illegally entered Mexico or Panama, or having not met the vaccination requirements make a Venezuelan ineligible.

Just 127 Venezuelans were encountered per month from fiscal years 2014 to 2019 but that number has risen dramatically since then, reaching over 25,000 in August and 33,000 in September.

The new process has already cut the number of illegal entries by Venezuelan nationals by more than 85 percent, the administration said on Saturday as the United States accepted the first Venezuelans who were authorized to enter the country.

The administration also said it was issuing new H-2B permits, largely used by farmworkers, to people from northern Central American countries and Haiti.

“We are doing the work every day to make sure that we deal with what we’re seeing in the southern border,” Jean-Pierre said.

“New reports showed at least 2 MILLION migrant encounters in FY22. This is the highest number in history but it doesn’t even account for the hundreds of thousands of gotaways. Our border is in crisis and the White House is in denial,” Sen. Marsha Blackburn (R-Tenn.) said in a statement.

“Make no mistake—this is an INVASION at our southern border. The party in power is exacerbating this national security crisis with lax border policies,” Rep. Jeff Duncan (R-S.C.) added.

Republicans have said they plan to try to increase border enforcement if they flip the House of Representatives and/or the Senate in the upcoming midterm elections.