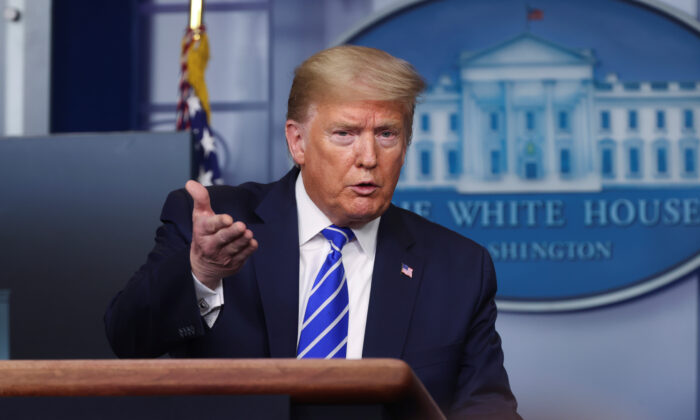 White House press secretary Kayleigh McEnany confirmed there will not be a CCP virus press briefing from President Donald Trump and his taskforce on Monday.

“Today we’re not tracking a briefing,” she told Fox News on Monday morning.

However, despite speculation that Trump might do away with them entirely, McEnany said the White House “will have briefings this week.”

There were no briefings on Saturday or Sunday, and Trump’s team held a relatively short news conference on Friday evening. It came after the president made comments about disinfectant and sunlight, which some news outlets claimed was him telling Americans to inject themselves with bleach or disinfectant.

Trump said on Friday at a meeting he was “asking a question sarcastically to reporters like you just to see what would happen.”

And a day later, on Saturday night, the president questioned the intention of some reporters.

“What is the purpose of having White House News Conferences when the Lamestream Media asks nothing but hostile questions & then refuses to report the truth or facts accurately,” he wrote on Twitter at the same time that he would have been holding the briefing.

The president was making a reference to comments he made during his White House briefing when a Department of Homeland Security undersecretary revealed that the virus deteriorates more quickly when subjected to heat, humidity, and ultraviolet rays from the sun.

Later in the Thursday news conference, he noted that “it wouldn’t be through injection” but “almost a cleaning, sterilization of an area.”

“I think the media is very slicey and dicey about how they put sentences together in order to create headlines. …We know for millennials in other studies that some people may only read the headlines. And if there’s not a graphic, they’re not going to look any further than that,” Birx told Fox News.