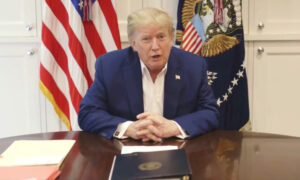 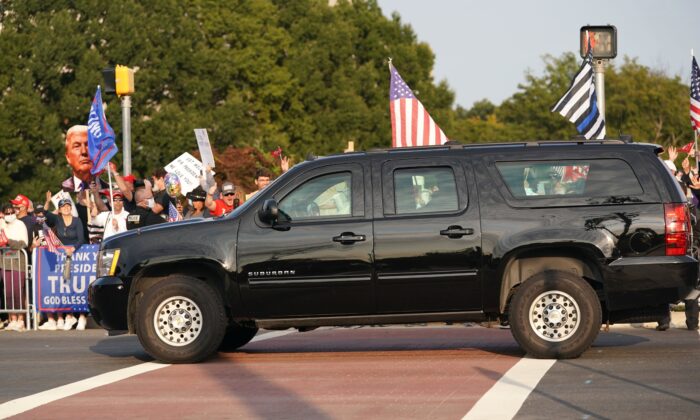 A car with President Donald Trump drives past supporters in a motorcade outside of Walter Reed Medical Center in Bethesda, Md., on Oct. 4, 2020. (Alex Edelman/AFP via Getty Images)
Donald Trump

Trump, from behind the glass of a sealed vehicle, waved and gave the thumbs-up gesture to well-wishers who had assembled outside the Walter Reed hospital, where the president was taken on Friday after announcing he and the first lady had tested positive for COVID-19, the illness caused by the CCP (Chinese Communist Party) virus.

The president was seen in the car wearing a mask, while Secret Service agents inside with him also wore masks and appeared to be wearing protective eyewear and gowns. The outing came after Trump wrote in a tweet that he might “pay a little surprise to some of the great patriots that we have out on the street.”

The president’s decision to stage the drive-by drew rebuke, with some health experts arguing it unnecessarily put Secret Service agents at risk, while the White House Correspondents’ Association on Monday criticized the move as “outrageous.”

On Sunday, White House physician Dr. Sean P. Conley said Trump’s condition “has continued to improve,” and another medical specialist said he could return to the White House “as early as tomorrow.”

National security adviser Robert O’Brien told CBS News on Sunday Trump is in “great shape” and is “firmly in command of the government and the country.”

“I think he’s going to stay at Walter Reed for at least another period of time,” O’Brien told CBS’s “Face the Nation.”

“Days seven and eight are the critical days,” O’Brien said. “I think the doctors want to make sure that they’re there for the president and he’s getting the best treatment, but he’s doing well.”

Trump is taking a number of medications, including dexamethasone, Remdesivir, and Regeneron, according to his team of doctors.

The president on Oct. 3 released a video, saying, “Over the next period of a few days, I guess that’s the real test, so we’ll be seeing what happens over those next couple of days.”

“I feel much better now. We’re working hard to get me all the way back. I have to be back because we still have to make America great again,” Trump said.