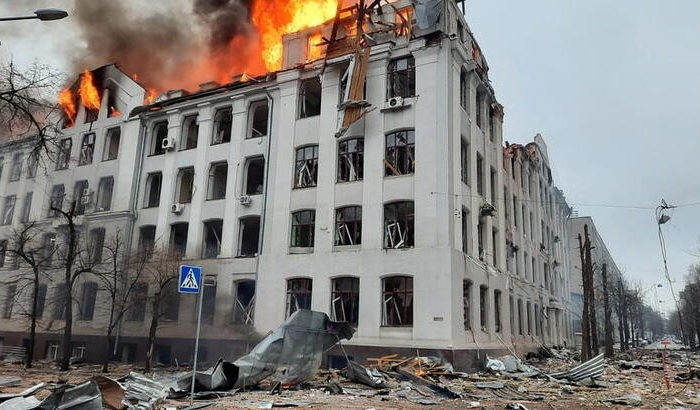 The area near National University after shelling in Kharkiv, Ukraine, on March 2, 2022. (Ukrainian State Emergency Service via Reuters)
Executive Branch

The White House said it is discouraging American civilians from going to Ukraine to fight against Russian troops, coming after Ukrainian President Volodymyr Zelensky called for foreign fighters.

“Ukrainians have shown their courage and they are calling on every resource and lever they have to defend themselves. We applaud their bravery, however our travel advisory remains. U.S. citizens should not travel to Ukraine,” deputy press secretary Karine Jean-Pierre said Wednesday when asked about whether the White House supports Americans going to the Eastern European country.

Several days after Russia attacked Ukraine, Zelensky issued a statement via social media that “citizens of the world” are welcome to join the fight against Russia.

“This is not just Russia’s invasion of Ukraine. This is the beginning of a war against Europe, against European structures, against democracy, against basic human rights, against a global order of law, rules, and peaceful coexistence,” he said.

Last week, the U.S. Department of State issued “Level 4: Do Not Travel” advisory for Ukraine, coming about a day after Russia launched its invasion.

Some reports have indicated that UK, European, and even Japanese individuals have tried to travel to Ukraine to fight Russian forces. UK Foreign Secretary Liz Truss has also expressed support for British citizens going to Ukraine.

Some Americans have apparently also gone to Ukraine in recent days.

“I feel guilty to not go,” Dax, 26, a veteran of the elite U.S. 82nd Airborne Division infantry who didn’t give his full name, told Reuters. Canadian national Bryson Woolsey, who has no military training and is buying a plane ticket to Poland, told the outlet that he quit his job as a cook on Sunday after Zelensky made the appeal.

Meanwhile, Zelensky and some Western officials called on U.S. and NATO forces to enforce a no-fly zone over Ukraine. The notion, however, was shot down by White House officials, including press secretary Jen Psaki, who noted that it would place NATO and the United States in direct confrontation with Russia.

At the same time, Russia’s leadership has increasingly issued more and more threats about the possibility of a nuclear war breaking out. On Thursday morning, Russian Foreign Minister Sergei Lavrov, in an interview, warned that a potential World War III “will be nuclear.”