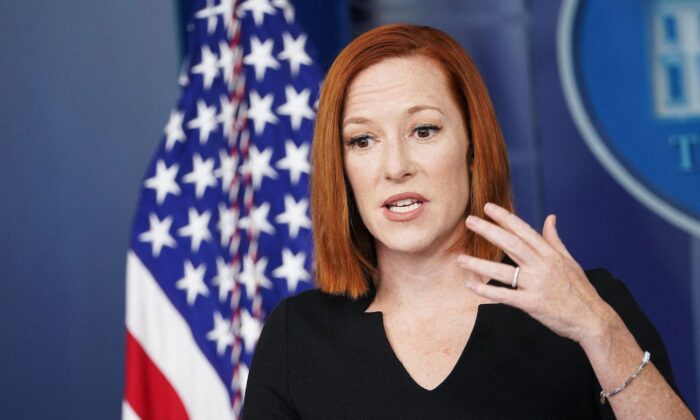 White House Says It Expects Progress With Russia in Talks, Calls Some Russian Proposals ‘Not Viable’

The White House said it expects to make progress with Russia during talks next week, but that some of Moscow’s proposals are “not viable.”

The two countries have scheduled three sets of talks to take place in Europe.

The meetings start on Jan. 10 in Geneva with talks between U.S. Deputy Secretary of State Wendy Sherman and her Russian counterpart, to be followed by a meeting of the NATO–Russia Council two days later.

Then on Jan. 13, the Organization for Security and Cooperation in Europe (OSCE) will meet to discuss broader European security. The United States will be represented by its ambassador to the organization, Mike Carpenter.

The talks are taking place as Russia has amassed troops at its border with Ukraine in recent weeks, with estimates of as many as 100,000 along the border and in Russian-annexed Crimea.

White House press secretary Jen Psaki at a press briefing on Jan. 5 blamed Russia for the rise in tensions with Ukraine and said the United States also plans to raise the issue of past grievances with Russia.

“Over the past two decades, it is Russia that has invaded two neighboring countries, interfered in many other elections, used chemical weapons to attempt assassinations on foreign soil, and violated international arms control agreements,” she said.

Last month, Moscow submitted draft security documents demanding that NATO deny membership to Ukraine and other former Soviet countries and roll back its military deployments in Central and Eastern Europe.

Without being specific, Psaki said progress is possible on some of Moscow’s proposals while others aren’t worth discussing.

“President [Joe] Biden has made clear that we can make progress on some issues while others are not viable,” said Psaki. “We’re not responding to them point by point, and I don’t expect we will as part of these negotiations, because in our experience, you don’t make actual progress negotiating in public, and also because many of the proposals don’t merit such response.”

Psaki said it continues to be the U.S. position that borders shouldn’t be redrawn by force and that countries have the sovereign right to determine who they associate with.

Psaki also says the United States will also seek to support progress on the Minsk accords, which seek to end violence in Ukraine’s Donbas region, which is now under de facto control by Russia-backed separatists who rose up against Kyiv in 2014.

Biden has spoken directly with Russian President Vladimir Putin twice in recent weeks—once virtually and once over the phone.

On the calls, Biden urged Putin to deescalate tensions with Ukraine and made clear that the United States and its allies would respond with severe sanctions if Russia further invaded Ukraine, according to the White House.

Biden has said that sending troops to Ukraine in the event of a Russian invasion is “not on the table.” However, White House officials have said “other measures” could include additional defensive material to the Ukrainians and the fortification of NATO allies on Russia’s eastern flank with additional capabilities if Russia decides to invade.

Secretary of State Antony Blinken met with German Foreign Minister Annalena Baerbock in Washington on Jan. 5. The two presented a unified front in saying Russia’s military buildup near Ukraine’s border poses an “immediate and urgent challenge” to European security and that any intervention would draw severe consequences.

The severity of any response to a Russian invasion of Ukraine hinges largely on Germany, as Europe’s biggest economy.

Blinken said gas won’t likely flow through a yet-to-be-approved Nord Stream 2 pipeline if Russia invades Ukraine. The pipeline is set to carry 55 billion cubic meters of natural gas from Russia to Germany every year if approved by regulators.

Baerbock didn’t specifically address the question of whether the pipeline would be operationalized in the event of a Russian intervention. However, she said the new German government would abide by an agreement signed last summer with Washington that says Russia will not be allowed to use energy as a political weapon against Europe.