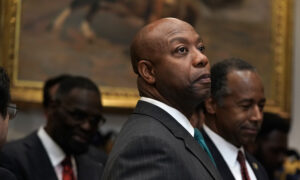 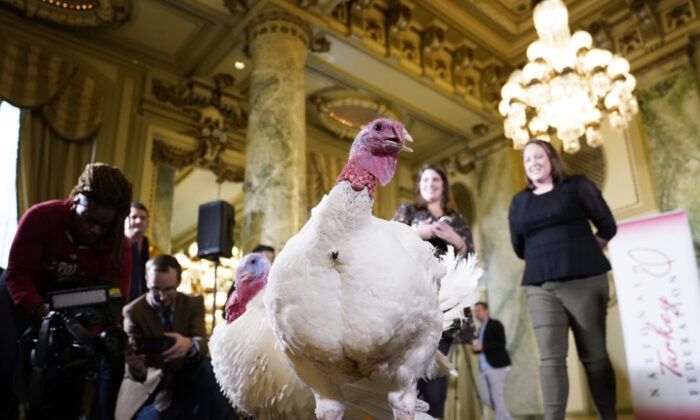 Bread and Butter, the National Thanksgiving Turkey and its alternate, are shown to members of the media during a press conference held by the National Turkey Federation at the Willard Hotel in Washington on Nov. 25, 2019. (Win McNamee/Getty Images)
Trump Administration

The White House on Monday revealed the names of the two turkeys that will be pardoned by President Donald Trump as part of its a time-honored Thanksgiving tradition.

In a press release, The White House announced this year’s lucky contenders from North Carolina are Bread and Butter, and both will battle it out to receive a pardon from the president at the ceremony which falls on Nov.26.

The feathery pair were given their names by the president and first lady, Melania, who selected the titles from a list of 15 pairs of names submitted by the National Turkey Federation.

Butter, who weighs 47 pounds, is a fan of sweet potato fries, bagpipes, and watching NASCAR, according to the release, while Bread, who weighs 45 pounds, enjoys Cheerwine soda, bluegrass music, and college basketball.

Although only one of the turkeys will receive the coveted pardon after a public vote, both of them will be spared the fate of being eaten this Thanksgiving.

The lucky turkeys arrived at the luxurious Willard Hotel on Sunday and enjoyed a stay in the famous D.C. suite ahead of Tuesday’s ceremony, which will see Trump publically spare the birds from becoming Thanksgiving dinner.

The tradition of pardoning White House turkeys has been traced back to President Abraham Lincoln’s 1863 clemency to a turkey, recorded in an 1865 dispatch by White House reporter Noah Brooks.

Brooks noted that a live turkey had been bought home for Christmas dinner but Lincoln’s son, Tad, asked his father to spare the bird’s life.

It has also been claimed that former President Harry S. Truman began the amusing tradition, and subsequent presidents followed. However, he and various administrations were not known to “pardon” the birds.

An official turkey pardoning ceremony began when former President George H.W. Bush took office in 1989 and told animal rights activists outside the White House that a turkey would be granted a “Presidential pardon as of right now.” He said the bird would then be sent to “live out his days on a children’s farm.”

Trump has kept the tradition, last year delivering an official pardon to two turkeys named Peas and Carrots who were later sent to “Gobbler’s Rest,” an agricultural education facility at Virginia Tech University.

According to the White House, the act of gifting a turkey to a U.S. president dates back as early as the 1870s and by the 1940s, when farmers and manufacturers began to “send birds to the White House as a means of promoting the poultry industry.”

Thanksgiving has been celebrated nationally on and off since 1789, when President George Washington declared a day of thanksgiving and prayer, partly to honor the new U.S. Constitution.

However, the tradition dates back almost 170 years to when the Pilgrims and the Wampanoag tribe feasted together for the first unofficial Thanksgiving in 1621, and thus Thanksgiving is now honored with a large meal surrounded by friends and family.