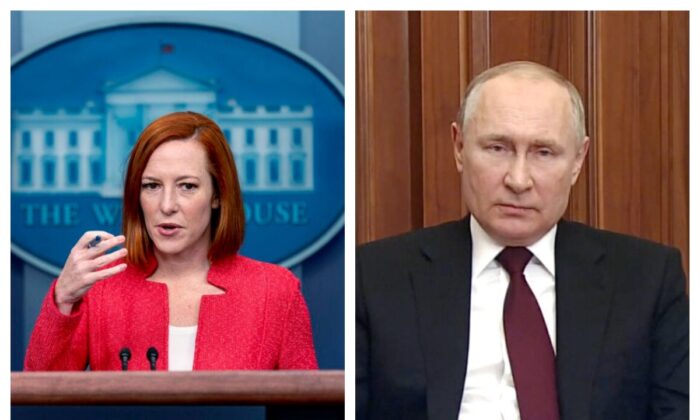 White House Responds to Proposal for ‘No-Fly’ Zone Over Ukraine

The Biden administration and NATO both rejected calls for a “no-fly” zone over Ukraine, saying that it would escalate the conflict.

Over the past weekend, there were calls for the United States and NATO to set one up over Ukraine, as Russian jets have carried out bombing runs on Ukrainian targets. Rep. Adam Kinzinger (R-Ill.) was one of those who called for such a move, which drew sharp criticism on social media.

White House spokeswoman Jen Psaki said on MSNBC Monday morning that setting up a no-fly zone would require enforcement, meaning that the United States and NATO would be shooting down Russian planes.

“That is definitely escalating and would potentially put us in a place in a military conflict with Russia. That’s something the president doesn’t want to do,” she remarked. Psaki said the White House and President Joe Biden have repeatedly said that American troops won’t be fighting Russian soldiers unless Moscow decides to attack a NATO member in an Article 5 situation.

The United States and its allies have opted to provide Ukraine with military equipment, including fighter planes, since last week. Those countries have also placed wide-ranging economic sanctions, including targeting the Russian Central Bank and President Vladimir Putin.

“The role of the president of the United States, any president, is to make an assessment about what is in the interest of the United States, our national security interests, the American people, and certainly weigh very heavily how we’re leading the global community,” Psaki told reporters last week. “It is not in our interest to be in a war with Russia. So no, we are not sending U.S. troops to Ukraine.”

NATO Secretary-General Jens Stoltenberg also shot down the idea of implementing a no-fly zone, telling MSNBC that the alliance has “no intentions of moving into Ukraine neither on the ground or in the airspace,” noting that such a scenario could see the conflict “spiral out of control that escalates even further into concern for full-fledged war in Europe involving NATO allies.”

“If the West does this, Ukraine will defeat the aggressor with much less blood,” Zelensky wrote in a statement posted online.

“The sanctions are heading in the right direction. In addition to disconnecting the Russian Central Bank from SWIFT and providing more Stingers and anti-tank weapons, we need the West to impose a no-fly zone over significant parts of Ukraine,” he added. “Ukraine can beat the aggressor. We are proving this to the world. But our allies must also do their part.”