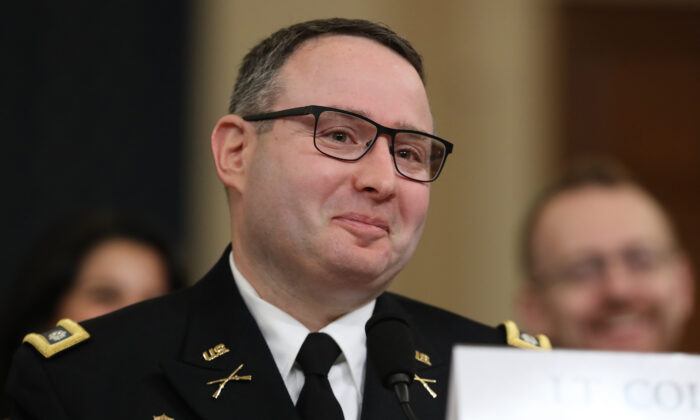 White House officials on Tuesday issued a response to Lt. Col. Alexander Vindman’s testimony in the House impeachment inquiry, saying he had nothing more than disagreements on policy in Ukraine, as the White House sets policy “not unelected bureaucrats.”

Vindman, who serves on the National Security Council, told the House Intelligence Committee that he was worried by the Trump administration asking Ukraine to investigate former Vice President Joe Biden and Ukraine’s role in alleged 2016 election meddling.

He said that Trump veered from talking points that were given to him by the National Security Council (NSC), and that Trump didn’t talk about broader corruption in Ukraine.

“Those were the recommended talking points that were cleared through the NSC staff,” he said in the hearing.

In the phone call on July 25 with Ukrainian President Zelensky, Trump asked his counterpart to “look into” Biden and his son Hunter Biden, who sat on the board of Ukrainian firm Burisma Holdings, which has long been accused of corruption. Trump denied allegations that he misused his office or withheld military aid to Ukraine.

This is the nut of the whole thing.

Vindman apparently believes that HE’S the one who makes & coordinates U.S. policy.

This may come as a shock to him and the Democrats, but the President of the United States makes U.S. policy.

“The president is in charge of setting the foreign policy of the United States, not unelected bureaucrats,” the White House said in a statement, reported The Washington Times. “The president has every right to conduct American foreign policy in whatever way he sees fit and is not in any way obligated to follow bureaucratic talking points written by staff.”

The Trump campaign also responded to his testimony.

“He disagreed with the president,” Trump campaign communications director Tim Murtaugh wrote on Twitter. “Hate to break it to Adam Schiff and the Democrats but the president of the United States sets policy, not unelected bureaucrats. And policy disagreements are not impeachable offenses.”

Before, Vindman said that he didn’t believe it was proper to ask Ukraine for investigations.

“I did not think it was proper to demand that a foreign government investigate a U.S. citizen, and I was worried about the implications to the U.S. government’s support of Ukraine,” Vindman said. “I realized that if Ukraine pursued an investigation into the Bidens and Burisma, it would likely be interpreted as a partisan play, which would undoubtedly result in Ukraine losing the bipartisan support it has thus far maintained. This would all undermine U.S. national security.”