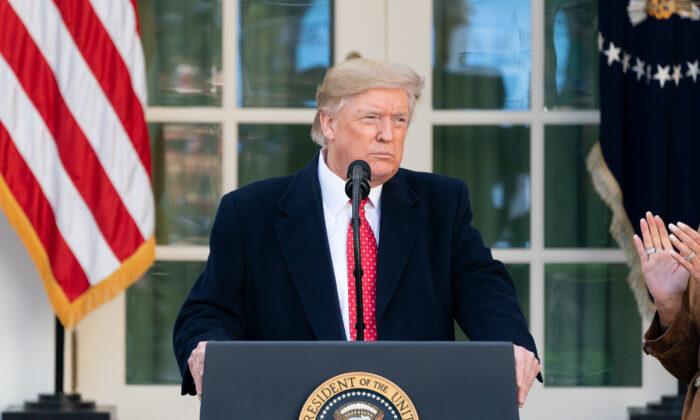 President Donald Trump addresses his remarks prior to pardoning “Butter” the turkey, in the Rose Garden of the White House on Nov. 26, 2019. (Andrea Hanks/White House)
Trump Administration

The White House slammed the Democrats’ report on the findings of the House Intelligence Committee impeachment inquiry on Dec. 3, saying the document “reads like the ramblings of a basement blogger straining to prove something when there is evidence of nothing.”

“At the end of a one-sided sham process, Chairman Schiff and the Democrats utterly failed to produce any evidence of wrongdoing by President Trump. This report reflects nothing more than their frustrations,” White House press secretary Stephanie Grisham said in a statement.

The Democrats’ report repeats the allegation—long promoted by that party—that President Donald Trump sought political gain by withholding security aid and the prospect of a White House meeting to pressure Ukraine to investigate his political opponent, Joe Biden. Over the course of two months, the impeachment inquiry failed to produce any firsthand evidence to substantiate that allegation.

Over the course of 300 pages, the Democrats’ report presents no direct evidence of Trump directing anyone to carry out the scheme that’s alleged by the Democrats. Just four paragraphs into the storyline, the report references a presumption that Ambassador Gordon Sondland made about a connection between the possibility of a White House meeting and the prospect of assurance by Ukraine to conduct an investigation.

“Ambassador Sondland had relayed a message to President Zelensky six days earlier that ‘assurances to run a fully transparent investigation’ and ‘turn over every stone’ were necessary in his call with President Trump,” the report states.

“Ambassador Sondland understood these phrases to refer to two investigations politically beneficial to the President’s reelection campaign: one into former Vice President Joe Biden and a Ukrainian gas company called Burisma, on which his son sat on the board, and the other into a discredited conspiracy theory alleging that Ukraine, not Russia, interfered in the 2016 U.S. election.”

While the report doesn’t make much ado about the fact that Sondland’s message to Zelensky was based on a presumption, Republicans hammered the point home when Sondland testified. When asked how he came to learn of a connection between the White House meeting and the investigations, Sondland said he presumed that the connection existed.

The report similarly relies on hearsay and presumptions to build the case for other allegations. Lacking direct evidence to substantiate that Trump withheld security assistance and the prospect of a White House meeting in order to pressure Ukraine, the Democrats instead repeatedly rely on Sondland’s presumption to make their case. Similarly, the report references the testimony of Special Envoy to Ukraine Kurt Volker but fails to clarify that Volker sought Ukraine’s commitment to an investigation without knowing of a connection to the Bidens and with the express purpose of changing Trump’s long-held view about pervasive corruption in Ukraine.

The Democrats’ impeachment report is expected to be presented before the House Judiciary Committee, which is scheduled to begin the first day of its own public impeachment hearings on Dec. 4. The hearings coincide with Trump’s visit to the United Kingdom for meetings with NATO leaders, timing that drew criticism from both the president and Secretary of State Mike Pompeo.

During his UK visit, Trump lambasted the Democrats conducting the impeachment inquiry.

“I think it’s a disgrace. I think the Democrats should be ashamed of themselves. If you look at impeachment, the word impeachment, here there was nothing wrong, nothing done wrong. It was a perfect conversation with a very nice gentleman, the president of Ukraine. The conversation was perfect,” Trump said. “This is what you’re going to impeach the president of the United States on?”

“That’s not the way our country is supposed to be run.”