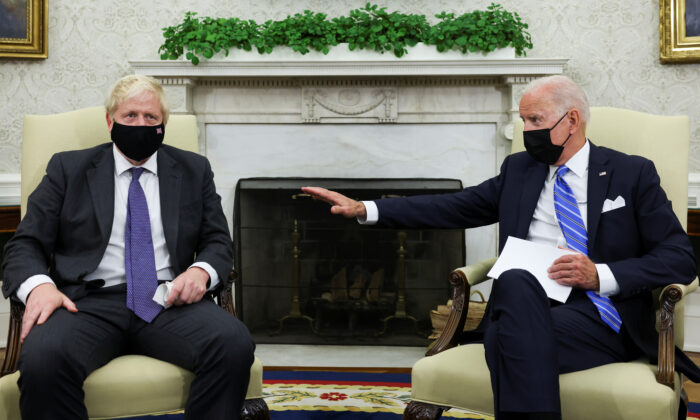 The White House press pool has filed a formal complaint against President Joe Biden after he wouldn’t answer questions about contentious topics while he met with UK Prime Minister Boris Johnson in the Oval Office on Sept. 21.

During the meeting, Biden and Johnson discussed trade, the COVID-19 pandemic, the U.S.–UK–Australia nuclear submarine deal that angered the French government, and several other topics. Johnson took a few questions and was finishing his response to a reporter’s inquiry when White House staffers told reporters to leave the room, cutting the prime minister off, video footage of the incident shows.

Before the interruption, Johnson said: “Would it be OK if we had a couple of questions? Just a couple?” Biden then responded: “Good luck.”

As aides shouted and media members left the room, Biden, who was wearing a mask, sat in his chair for several seconds before making a motion with his hand. Johnson, who was also wearing a mask, rapidly scanned the room amid the yelling.

“That’s absurd,” one reporter said as they left. “Two British reporters get questions, and we don’t get anything.”

“The entire editorial component of the U.S. pool went immediately into Jen Psaki’s office to register a formal complaint that no American reporters were recognized for questions in the president’s Oval Office, and that wranglers loudly shouted over the president as he seemed to give an answer to Ed O’Keefe’s question about the situation at the southern border,” Portnoy, the head of the White House Correspondents’ Association, wrote. “Biden’s answer could not be heard over the shouting.

“Psaki was unaware that the incident had occurred, and suggested that she was not in position to offer an immediate solution. Your pooler requested a press conference. Psaki suggested the president takes questions several times a week.”

Ed O’Keefe of CBS News said he couldn’t hear Biden’s answer to his question about the U.S.–Mexico border crisis, due to White House aides shouting them down along with Biden’s muffled response due to his mask. White House aides also appeared to cut off Johnson’s response by shouting and telling everyone to leave the Oval Office, he said.

The White House press office didn’t respond to a request for comment by press time.