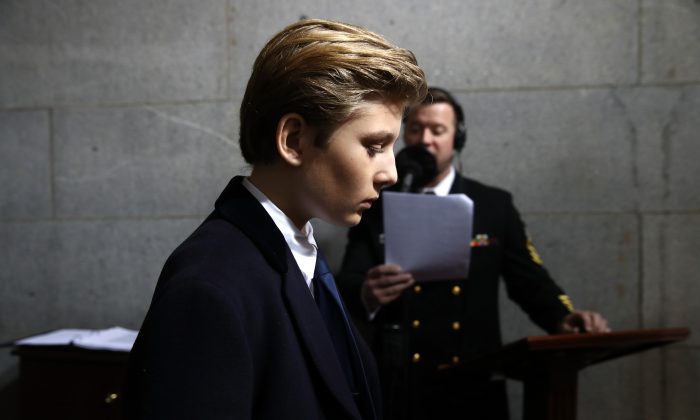 Barron Trump arrives on the West Front of the US Capitol for Donald Trump's inauguration ceremony, in Washington, DC, on Jan. 20, 2017. (WIN MCNAMEE/AFP/Getty Images)
US

The White House released a statement after jokes were made at the expense of President Donald Trump’s 10-year-old son, Barron.

“It is a longstanding tradition that the children of Presidents are afforded the opportunity to grow up outside of the political spotlight. The White House fully expects this tradition to continue. We appreciate your cooperation in this matter,” according to a statement from the Office of the White House Press Secretary on Tuesday afternoon.

On Friday, “Saturday Night Live” writer Katie Rich was derided for making a joke on Twitter, saying Barron would be the “country’s first homeschool shooter.” She later deactivated her account before reactivating it, deleting her posts, and tweeting an apology. She attempted the joke as Barron was standing near his father during Inauguration Day on Friday.

The New York Times and other media outlets reported that Rich was suspended from “SNL” indefinitely after the tweet.

Former White House intern Monica Lewinsky, who now is an anti-bullying activist, also wrote on Twitter that children need to be shielded from bullying.

Barron is the son of Trump and his wife, Melania. The president has four other grown children from previous marriages.