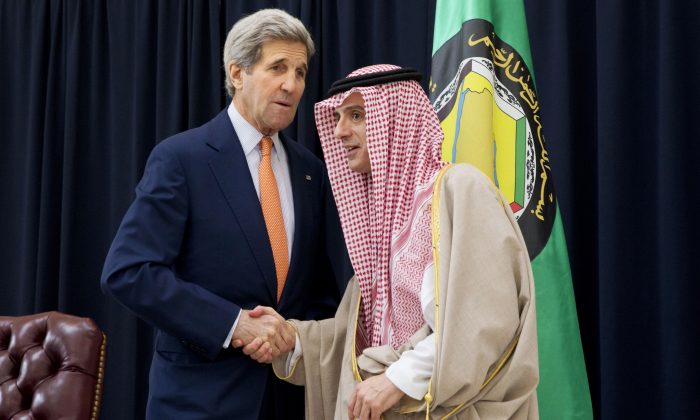 Saudi Foreign Minister Adel al-Jubeir (R) shakes hands with US Secretary of State John Kerry during a joint press conference after a meeting with foreign ministers from the six-nation Gulf Cooperation Council at King Salman airbase on January 23, 2016 in Riyadh. (JACQUELYN MARTIN/AFP/Getty Images)
US

The Obama Administration may soon release 28 pages from the Congressional inquiry into the 9/11 attacks that could implicate Saudi connections to the terrorists.

There has been growing public clamoring to release the pages in the wake of a Senate bill that would allow American victims of terrorist attacks to sue sovereign nations that are suspected of funding terrorist groups.

Of the 19 hijackers responsible for the 9/11 attack, 15 were citizens of Saudi Arabia, and the government was suspected of foul play.

Both of the Democratic presidential candidates have called for the 28 pages to be released, as well as GOP front-runner Donald Trump.

Pressure on the administration to release the papers has been exacerbated by Saudi threats to unload $750 billion in US bonds and other assets in economic retaliation if the Senate bill were to pass.

Both of the Democratic presidential candidates have called for the 28 pages to be released, as well as GOP front-runner Donald Trump.

The documents, kept in a secure room in the basement of the Capitol, contain information from the joint congressional inquiry into “specific sources of foreign support for some of the Sept. 11 hijackers while they were in the United States.”

Bob Graham, who was co-chairman of that bipartisan panel, and others say the documents point suspicion at the Saudis. President Barack Obama has hinted the administration might soon release at least part of the documents, noting that James Clapper, national director of intelligence, has been reviewing the classified pages.

The disclosure would come at a time of strained U.S. relations with Saudi Arabia, a long-time American ally.

I can’t tell you what I said when I decided to tear up the check and give it back to him because I can’t repeat it on television.
— Rudy Giuliani, former mayor, New York City

“I hope that decision is to honor the American people and make it available,” Graham told NBC’s “Meet the Press” on Sunday. “The most important unanswered question of 9/11 is, did these 19 people conduct this very sophisticated plot alone, or were they supported?”

Tim Roemer, who was a member of both the joint congressional inquiry as well as the 9/11 Commission and has read the secret chapter three times, described the 28 pages as a “preliminary police report.”

The pages were withheld from the 838-page report on the orders of President George W. Bush, who said the release could divulge intelligence sources and methods. Still, protecting U.S.-Saudi diplomatic relations also was believed to have been a factor.

Roemer said many questions remain about the roles of Fahad al Thumairy, an official at the Saudi consulate in Los Angeles who allegedly helped two of the hijackers find housing and transportation after they arrived in Southern California.

Al Thumairy was later denied entry into the United States in May 2003 after the State Department alleged that he might be involved in terrorist activity. Roemer also wants to know more about Omar al Bayoumi, who was strongly suspected of being a Saudi spy and was alleged to have been helpful to the hijackers.

“We did not discover … Saudi government involvement at the highest level of the 9/11 attacks,” Roemer said. But he added: “We certainly did not exonerate the Saudis. … Saudi was a fertile ground for fundraising for al-Qaida. Some of these issues continue to be problems today. That’s why we need to continue to get to the bottom of this.”

The Senate bill and the Saudi government’s crass response is reminiscent of the oil kingdom’s original response the 9/11 attacks, which is being brought back from the archives.

In an interview on Fox and Friends on Thursday, Rudy Giuliani recounts how a Saudi prince had offered the city $10 million in condolences, and then proceeded to blame the attack on the United States and Israel.

“I was given a check by a Saudi Arabian prince for $10 million and he had the temerity to put out a press release blaming America and Israel for the attack on September 11th,” said Giuliani, who was the mayor of New York City when the attacks happened. “I can’t tell you what I said when I decided to tear up the check and give it back to him because I can’t repeat it on television.”

In a statement released in October of 2001, Prince Alwaleed said that the roots of the attack laid in American foreign policy, especially its support of the Israeli occupation of the West Bank and Gaza.

The US “should re-examine its policies in the Middle East and adopt a more balanced stand toward the Palestinian cause,” the statement said, according to CNN. “While the U.N. passed clear resolutions numbered 242 and 338 calling for the Israeli withdrawal from the West Bank and Gaza Strip decades ago, our Palestinian brethren continue to be slaughtered at the hands of Israelis while the world turns the other cheek.”

Giuliani made a vigorous case for the 28 pages from the 9/11 report to be made public.

“The American people need to know exactly what was the role of the Saudi Arabian government in the attack. We are entitled to know who killed our loved ones and who almost killed all of us,” Giuliani said.

However, others have suggested that the 28 pages won’t provide any conclusions about whether there was Saudi involvement in the attacks.

California Rep. Adam Schiff, the top Democrat on the House Intelligence Committee, has read the pages and said this past week that while he wants to see them declassified to end speculation about what they say, releasing them will not quell the debate over the issue.

“As is often the case, the reality is less damaging than the uncertainty,” he said.