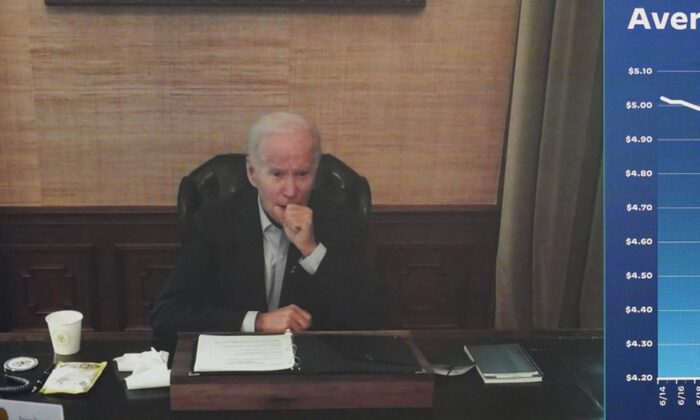 “I checked in with his team late last night. He was feeling well. He had a good day yesterday. He’s got … an upper respiratory infection and he’s doing just fine. We haven’t gotten any updates this morning, but throughout the night he was feeling much, much better,” he told CBS, adding that Biden contracted the Omicron BA.5 subvariant.

A day before testing positive, Biden traveled on Air Force One for a climate-related speech in Massachusetts. But Jha said Sunday that no close contacts of the 79-year-old president tested positive for the virus.

The White House has attempted to highlight Biden’s alleged ability to work through his illness. On Thursday it released a video of him reassuring Americans he was doing fine, and on Friday he participated in virtual meetings with White House staff.

Dr. Kevin O’Connor, the White House physician, said Biden took Paxlovid, an antiviral treatment manufactured by Pfizer, and was also taking Tylenol. Several weeks ago, the Centers for Disease Control and Prevention issued an alert saying Paxlovid could lead to so-called “COVID rebound,” or a return of COVID-19 symptoms after testing negative.

On Saturday, O’Connor said in a letter (pdf) that Biden was suffering from a sore throat, loose cough, body aches, and a runny nose. Biden, who has received four total COVID-19 vaccine doses, had a normal pulse, blood pressure, temperature, and respiratory rate, according to the letter.

It’s not clear exactly where Biden contracted the virus, and White House officials have provided no update. Other than the trip to Massachusetts, the president recently returned from a trip to the Middle East and held public events before that trip in which he had close personal interactions with scores of people.

During Sunday’s interview with CBS, Jha also said that more Americans should wear masks and promoted COVID-19 vaccines, although a growing number of studies are increasingly casting doubt on the efficacy of both protocols.

Jha added that the White House would continue to provide updates on Biden’s condition or if he has long-term symptoms.

“Obviously if he has persistent symptoms, obviously if any of them interfere with his ability to carry out his duties, we will disclose that early and often with the American people,” he said, adding, “The president’s been doing well and we’re going to expect that he’s going to continue to do so.”