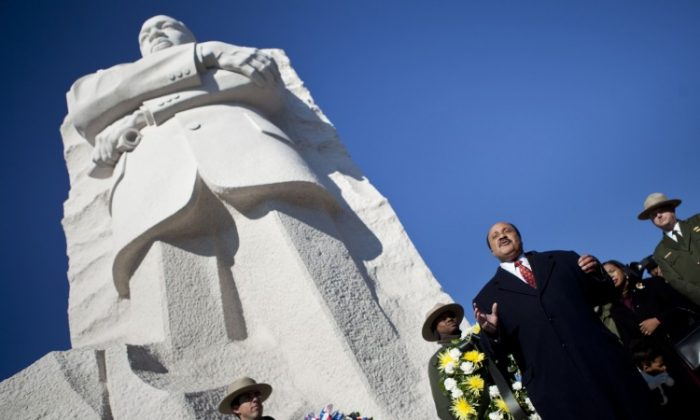 Martin Luther King III speaks at the base of a statue to his father after a wreath-laying ceremony at the Martin Luther King Jr. Memorial on the National Mall Jan.15, in Washington. (Brendan Smialowski/Getty Images)
US

President Obama and the White House released a presidential proclamation this weekend reminding the American people of the importance of the Martin Luther King Jr. holiday, and the civil rights leader’s achievements.

“On the Martin Luther King Jr., federal holiday, we celebrate the man who fought for the America he knew was possible,” the proclamation stated.

“As we work to meet the challenges of our time, from fixing our schools so every child gets a world-class education to ensuring all Americans have access to strong and secure economic opportunity, let us draw strength from Dr. King’s stirring affirmation that ‘Everybody can be great because everybody can serve.'”

Martin Luther King Jr. is one of only three individuals to have a national holiday in his honor, the other two being first U.S. President George Washington, and the Italian explorer Christopher Columbus.

The idea of a national federal holiday honoring the memory of Martin Luther King Jr. was first introduced by Rep. John Conyers (D-Mich.) to Congress just four days after the civil rights leader was assassinated, but the Legislature took no action on the measure.

After overcoming some initial resistance, the Martin Luther King holiday was finally signed into federal law by President Ronald Reagan in 1983, and first observed on Jan. 20, 1986.

Americans all across the country will celebrate the memory of Dr. King on Monday, Jan. 16. At the Kennedy Center in Washington, D.C., Grammy Award-winning musician Bobby McFerrin will put on a musical tribute to King, titled “Let Freedom Ring” at 6 p.m.

In New York City, artists will also honor Dr. King through dance and song at the Peter Jay Sharp Theatre at Symphony Space at 6:30 p.m.