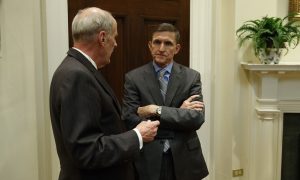 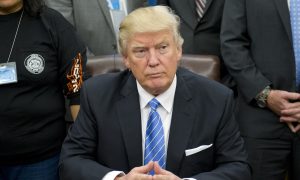 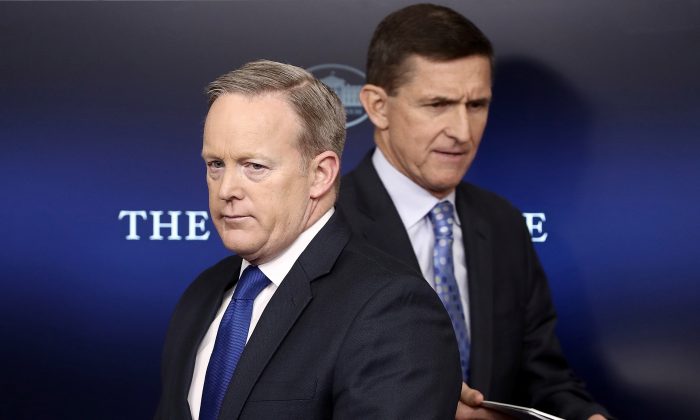 But confusion has ensued
By Jack Phillips
Print

White House Press Secretary Sean Spicer followed the leads of President Trump and National Security Adviser Michael Flynn when he said that Iran is “on notice” during his Thursday briefing to the press.

Flynn, in a statement on Wednesday night, said: “These are just the latest of a series of incidents in the past six months in which Houthi forces that Iran has trained and armed have struck Emirati and Saudi vessels, and threatened U.S. and allied vessels transiting the Red Sea. In these and other similar activities, Iran continues to threaten U.S. friends and allies in the region.”

“As of today, we are officially putting Iran on notice,” he added.

“I think General [Michael] Flynn was really clear yesterday that Iran has violated the Joint Resolution, that Iran’s additional hostile actions that it took against our Navy vessel are ones that we are very clear are not going to sit by and take,” Spicer said. “I think that we will have further updates for you on those additional actions.”

But he was corrected by a CBS News reporter.

Later, Pentagon spokesman Christopher Sherwood told The Intercept that the attack wasn’t carried out by Iran, but the Pentagon suspects that it was Yemeni Houthi rebels that carried it out.

“It was a Saudi ship – it was actually a frigate” said Sherwood. “It was [conducted by] suspected Houthi rebels off the coast of Yemen.”

However, Fox News reported that a U.S. ship was intended to be the target of the Houthi attack.

The Houthis, a Shia militia group, received weapons from Iran in its war against Yemen’s government, which is backed by the Saudis. Iran has denied sending the rebels weapons.

The incident in question occurred in the southern Red Sea and was carried out by Iranian-backed Houthi rebels. Two Saudi sailors were killed and three were wounded. At first the ship was thought to have been struck by a missile.

But based on new analysis of a video showing the attack, American intelligence officials now believe this was, in fact, a suicide bomber whose small boat rammed the side of the Saudi vessel.

In the audio heard on the video, a voice narrating the attack shouts in Arabic, “Allahu akbar [God is great], death to America, death to Israel, a curse on the Jews and victory for Islam.”

The Intercept claimed that Fox “misreported” on the attack.

The Houthis have fired at ships near Yemen’s coast, including an October incident when rebels fired missile at the American warship the USS Mason. The U.S. struck Houthi radar sites on the coast in retaliation, according to the WSJ.

Fox also reported: “The attack, near the Bab al Mandab Strait connecting the Red Sea to the Gulf of Aden, occurred in the same area where U.S. Navy warships came under missile attack in October. An American destroyer shot down those incoming missiles — the first successful engagement in combat using an American SM-2 missile. USS Nitze, an American destroyer, retaliated soon after, launching Tomahawk missiles on October 13 at multiple Houthi radar sites in Yemen.”

Trump, in a tweet, wrote that Iran should be placed on notice over firing a ballistic missile earlier this week.

“Iran was on its last legs and ready to collapse until the U.S. came along and gave it a life-line in the form of the Iran Deal: $150 billion,” the president also tweeted.