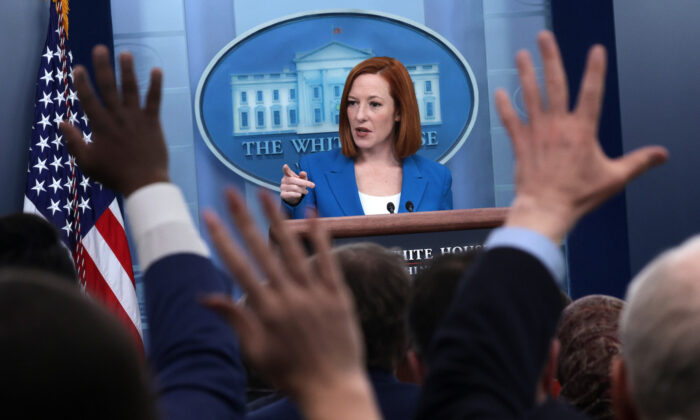 The press secretary said she had two “socially-distanced” meetings with President Joe Biden on Monday, ahead of the president’s planned trip to Europe this week, and that Biden has tested negative for the virus via PCR test.

“Today, in preparation for travel to Europe, I took a PCR test this morning,” Psaki’s statement reads. “That test came back positive, which means I will be adhering to CDC (Centers for Disease Control and Prevention) guidance and no longer be traveling on the president’s trip to Europe.”

The president is traveling to Brussels, Belgium, this week to attend a NATO summit and a European Council Summit. He will then visit Poland to meet with leadership there amid the ongoing war between Russia and Ukraine.

Psaki, 43, says she is sharing the results of the test “out of an abundance of transparency,” adding that she is experiencing mild symptoms and will work from home, pending a negative test result and a five-day isolation period as recommended by the CDC.

Psaki also adds that her symptoms are mild, “thanks to the vaccine.”

She had also tested positive in October.

She did not attend Tuesday’s scheduled press briefing, where White House Deputy Press Secretary Chris Meagher, standing in for Psaki, told reporters that the members of the press who attended Monday’s briefing would not be considered “close contacts” to Psaki.

“We are currently conducting contact tracing, and any member of the press who’s considered to be a close contact will be contacted,” said Meagher. “But if the close contact is determined, it would not be through yesterday’s briefing. So we just wanted to be clear about that.”

Psaki also tested positive for the virus back in October and, as a result, did not accompany Biden to Europe then to attend the G-20 summit in Rome and the United Nations climate change conference in Glasgow.